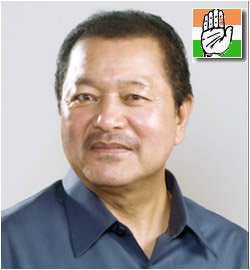 Pu Lalthanhawla, a member of the Indian National Congress, is the present Chief Minister of Mizoram. He has held this post from December 2008.

Pu Lalthanhawla was born on May 6, 1942 to H. P. Sailo and Lalsawmliani Chawngthu. He completed his schooling in 1961. In 1964 he earned a degree in B.A. from Aijal College. He is married to Lal Riliani.