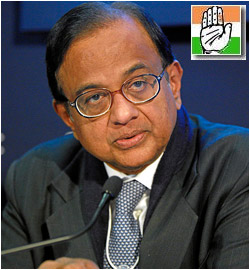 Chidambaram Palaniappan, an Indian politician and a former Union Minister of Finance under the United Progressive Alliance government (UPA). He is a member of one of the largest and oldest national party of India, the Indian National Congress. The last two terms of the UPA government, led by the Indian National Congress party, have seen P. Chidambaram holding many important positions. From May 2004 to November 2008, he served as the Finance Minister and in November 2008 he was inducted as the Home Affairs Minister, when Shri Shivraj Patil resigned from the post as an aftermath of the Mumbai terror attacks. He remained at this post for three and a half years and then succeeded Pranab Mukherjee as Finance Minister when the latter became the new President of India.

P. Chidambaram was born on 16 September 1945 to Shri Kandanur L. Ct. L. Palaniappa Chettiar and Smt. Lakshmi Achi. He was born in the state of Tamil Nadu in a place called Kanadukathan, which falls in the Sivaganga District. He has one sister and two brothers. His father was a business person who was into trading, plantations and textiles. Chidambaram’s grandfather and grand-uncles were co-founders of United India Insurance, Indian Bank, Annamalai University and Indian Overseas Bank. Shri Raja Sir Annamalai Chettiar was his maternal grandfather, who was a banker and a wealthy merchant.

P. Chidambaram is a highly qualified person. He completed his schooling from Madras Christian College Higher Secondary School and obtained a pre-university degree from Chennai’s Loyola College. He holds dual bachelor’s degree. Firstly he completed his B.A. in statistics from Chennai’s Presidency College and thereafter he did a bachelor’s degree in Law from Madras Law College, which is at present called Dr. Ambedkar Government Law College. He did his MBA from Harvard Business School and also holds a master’s degree from Chennai’s Loyola College. His interests include reading books in modern literature, particularly Tamil literature.

Kailasam, is a senior advocate who practices in the Madras High Court and in the Supreme Court. Smt. Soundra Kailasam is also a famous Tamil author and poet. P Chidambaram and his wife have a son Karti P. Chidambaram, who is a BBA from University of Texas, Austin. He has also done a Masters in Law from the University of Cambridge in UK. As an AICC member of the Congress party, Karti P. Chidambaram's activities are concentrated in Tamil Nadu state politics. He married Dr. Srinidi Rangarajan, a doctor attached with Apollo Hospitals, Chennai. She is also a renowned Bharatnatyam dancer. They have a daughter, Aditi Nalini Chidambaram.

P Chidambaram's professional background and entry in politics
P. Chidambaram was not so keen to join his father’s business. He was more inclined to legal practice. He started practicing in the Madras High Court. By 1984 he was a senior advocate. His offices were in Chennai and Delhi. Eventually he became a practicing lawyer in the Supreme Court and other High Courts in India.

P. Chidambaram was a Union Leader for MRF, and with time he paved his way up in the Indian National Congress party.

Other Activities and Memberships