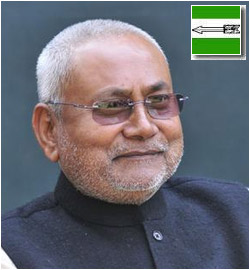 Nitish Kumar, a senior Indian politician, is the present Chief Minister of the state of Bihar, India. He has held the position since 2005. Nitish Kumar is a member of the Janata Dal (United) Party and has served as a Union Minister of India. He has won accolades as Chief Minister for his efforts in developing and implementing several activities, including construction of bridges that were long due, re-laying roads, ensuring participation of doctors in primary health centers, controlling crime rate, and many more. He has successfully appointed more than one lakh school teachers during his tenure as Chief Minister of Bihar. His career graph as an Indian politician reveals that he has held different important positions in the state as well as in the Parliament. His tenure includes memberships in different committees at different point of time.

Nitish Kumar was born on 1 March 1951 in a place called Bakhtiyarpur, at a distance of 50 km from Patna, the capital city of Bihar. He hails from a Kurmi family. His father, Shri Ram Lakhan Singh, worked in ayurvedic medicine and was a well known figure in the area; his mother was Smt. Parmeshwari Devi. His ancestral home is in a village called Kalyanbigha, which is adjacent to Bakhtiyarpur. He did his schooling in Bakhtiyarpur from Ganesh High School, completing matriculation. He was quite sharp and intelligent as a student. He studied in Patna Science College after matriculation. Thereafter he completed a degree course in electrical engineering from Bihar College of Engineering (now known as NIT Patna).

On 22 February 1973 he married Smt. Manju Sinha, who is by profession a teacher. His wife died in the year 2007 when she was 53 years old. They have a son Nishant, a graduate from BIT Mesra. Nitish Kumar is a teetotaler and a non-smoker. His favourite pastimes include reading books and watching films.

After completing electrical engineering, Nitish Kumar worked with Bihar State Electricity Board for some time before joining politics.

Nitish Kumar’s father Kaviraj Ram Lakhan Singh was a freedom fighter. He was close to one of the founders of modern Bihar, a great Gandhian and Bihar Vibhuti Shri Anugrah Narayan Sinha. Kaviraj Ram Lakhan Singh was a member of the Indian National Congress for some time but left the party when his candidature in general elections held in 1952 and 1957 was denied. He later joined the Janata Party. Nitish Kumar was highly inspired by Jaiprakash Narayan, which saw his entry into active politics in the year 1974 when he demonstrated a key role in the JP movement. He came in contact with some of the then stalwarts of Indian politics, like Satyendra Narayan Sinha, Karpoori Thakur, Ram Manohar Lohia, V.P. Singh and George Fernandes.

Contributions and achievements as Chief Minister of Bihar

Nitish Kumar became the first Bihar Chief Minister to launch poll campaign on social media. He has started leveraging Facebook and Twitter to list the achievements of the government in last decade and answer questions ahead of assembly polls. He has decided to highlight NDA's 'double standard' as the government at the centre has denied Bihar the special category status promised by Narendra Modi during 2014 general elections. In a bid to woo the Bihari diaspora and connect with Bihari migrants, Nitish Kumar is launching 'Bihar Samman Sammelan' in Delhi, Mumbai and other cities.