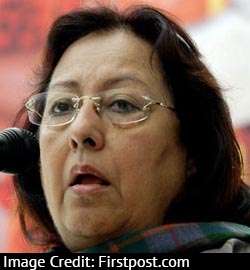 A prominent Indian politician, Najma Heptulla is the only Muslim minister in the Modi cabinet. A member of the Bharatiya Janata Party (BJP), she took oath as the Minister of Minority Affairs in the newly-formed government. She has been actively involved in the issues related to women. Apart from being a politician, Heptulla is also a prolific writer. She is the author of the book on AIDS titled "AIDS: Approaches to Prevention". A prominent writer, she has also written many research papers and articles in both Indian and foreign journals. She mostly writes on issues related to development of women.

She was born in Bhopal on April 13, 1940 to Syed Yusuf Ali and Fatima Yusuf Ali. She obtained a Masters Degree in Zoology, and a Ph.D. in Cardiac Anatomy from the University of Denver. In 1966, she married Akbarali A Heptulla and the couple is blessed with three daughters. Her husband played a key role in the formulation of the newspaper 'Patriot'. He passed away in 2007. Heptulla is a grand-niece of Maulana Abul Kalam Azad, a great Indian freedom fighter.

Heptulla, during her political career has occupied several positions. She has been a member of both Congress and BJP. After being a member of Congress for more than three decades, she joined BJP in 2004. As per the reports, she left Congress because of her stiff relationship with Congress President Sonia Gandhi. It was believed that she was associated with BJP leader Atal Bihari Vajpayee and hence joined BJP.

Rising speedily after joining BJP in 2004, she contested for the post of Vice President against UPA's Hamid Ansari. Though she lost the elections, her skills and qualities came to be recognised by all. During Nitin Gadkari's tenure as BJP president in 2010, Heptulla was appointed as one of the party's vice presidents. Heptulla lost her position after Rajnath Singh took over as the party President.

The time when NDA was in power, Heptulla gained the position of head of the Indian Council of Cultural Affairs and headed many Indian delegations abroad. The United Nations Development Programme appointed her as its human development ambassador. BJP never lost its trust in her and hence on May 26, 2014 she was appointed as the Minister of Minority Affairs in the Modi government.

After assuming charge she said that reservation is no solution for developing minorities. "We want to work for economic, social development and inclusive development (of minorities). Unless they don't become a part the part of development process, there will be lopsided development," she said. She recently claimed that the Muslims are now confident of the BJP in power and have supported Modi.

Over the years, she became a strong defender of women's empowerment. In 1992 she was the chairperson of the Conference of Women Parliamentarians of the Commonwealth Parliamentary Association in New Delhi. She also played a prominent role in the Fourth World Conference on Women in Beijing. Apart from this, she was also the head of the Indian delegation to the United Nations Commission on the Status of Women in 1997.