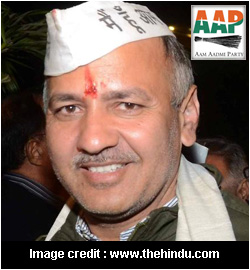 Manish Sisodia is a politician belonging to the Aam Aadmi Party (AAP). He is currently the deputy chief minister of the Union Territory of Delhi. He was also a key member of the anti-corruption movement 'India Against Corruption' led by social activist Anna Hazare in 2011. The movement laid the foundation of the agitation for Jan Lokpal (Citizen's Ombudsman). Sisodia is a close associate of Aam Aadmi Party chief Arvind Kejriwal. A journalist-turned-activist-turned- politician, Sisodia became a cabinet minister in the Delhi Government headed by Arvind Kejriwal in 2013. He held the portfolios of education, public works department (PWD), urban development, local bodies, land and building department. The government, however, resigned after a short tenure of 49 days.

Manish Sisodia was born to a Rajput family in Faugata village of Hapur district, Uttar Pradesh on 5 January, 1972. His father is Late Dharampal Singh. He obtained a post-graduate diploma in Journalism from Bharatiya Vidya Bhavan, New Delhi and worked for Zee News as news producer and news reader from 1997 to 2005. He also worked with All India Radio in different positions. Sisodia is an award-winning documentary filmmaker and has also worked as a radio anchor with FM channels.

He quit journalism and got involved in the movement for social awareness on a full time basis and participated in the agitation for Right to Information (RTI). He is also an active volunteer of Parivartan, a non-governmental organisation (NGO), which is working for social transformation of the marginalised and deprived sections of the community.

Being an RTI activist, Manish Sisodia coordinated many successful RTI campaigns in urban and rural parts of the country. On 19 December 2006, he co-founded the Public Cause Research Foundation that aimed at creating awareness about Indian laws like the RTI, along with Arvind Kejriwal and Abhinandan Sekhri.

Manish Sisodia conducted training, workshops, produced short films and documentaries on various issues of RTI and edited a monthly magazine Apna Panna. Later, he became very active in the struggle to pass the RTI Act and played a key role in laying the foundation of the Jan Lokpal Bill Movement. He was involved in drafting the first version of the proposed legislation, and along with other colleagues, was also jailed during the struggle against corruption.

Manish Sisodia's Election to the Legislative Assembly of Delhi

Manish Sisodia was elected to the legislative assembly of Delhi again in 2015. The AAP swept the polls by acquiring 67 of the total 70 seats in the elections. Manish Sisodia contested the same seat of Patparganj as he did in 2013, but this time against his former party-mate Vinod Kumar Binny who fought on a BJP ticket. Sisodia again won the seat with 75,477 votes against 46,716 votes of Binny. Manish Sisodia was sworn in as the first Deputy Chief Minister of Delhi on 14 February, 2015 along with Chief Minister Arvind Kejriwal and four others.