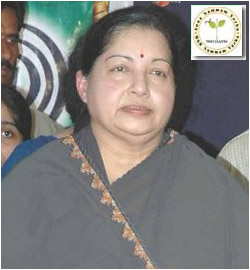 Jayalalithaa Jayaram, an Indian actress-turned-politician, was a six-time chief minister of Tamil Nadu. She was also the General Secretary of the All India Anna Dravida Munnetra Kazhagam (AIADMK) party. She was sworn-in as the chief minister for a record sixth term on 23 May 2016. Jayalalithaa died in office on December 5, 2016 at the age of 68 years after suffering from a major cardiac arrest. She held the distinction for being the second female Chief Minister of Tamil Nadu. Her followers fondly refer to her as "Amma", meaning mother, and "Puratchi Thalaivi", meaning revolutionary leader. Jayalalithaa, as she was commonly referred to, was a famous South Indian film star before she joined politics.

Jayalalithaa was born in Mysore (now in the state of Karnataka) at a place called Melukote on 24 February 1948. She hailed from a Tamil Iyengar family. Her father Jayaram, a lawyer by profession, passed away when she was just two years old. Consequently, Jayalalitha and her brother Jayakumar had to shift to Bangalore along with their mother.
Her mother, Vedavathi, started working in Tamil cinema with the screen name of Sandhya. ‘Jaya’, meaning 'victorious', is a prefix used in the names of Jayalalitha, her brother Jayakumar and many other members of their family. This portrays the family’s association with the Wodeyar Dynasty of Mysore, which dates back to 1880-1920 when Jayalalitha’s grandfather, a surgeon by profession, used to serve the Mysore Kingdom.

Jayalalitha completed her schooling from Bishop Cotton Girls' High School, Chennai, and Sacred Heart Matriculation School, also popularly known as Presentation Church Park Convent, in Chennai. She was a very good student and received scholarship for higher studies from the Government of India after completing her matriculation in 1964. However, she took up films shortly after that. Her career saw her working in films of different languages, including English, Hindi, Kannada, Malayalam, Tamil and Telugu.

Awards and Honours won by Jayalalitha