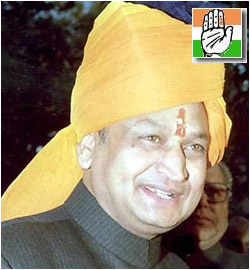 A member of the Indian National Congress (INC), Ashok Gehlot has been the Chief Minister of Rajasthan on two occasions, from 1998 to 2003 and again from 2008 to 2013. He also served as Union Minister a few times. He was elected for the first time to the 7th Lok Sabha from Jodhpur parliamentary constituency in 1980. He went on to represent Jodhpur parliamentary constituency in the 8th, 10th, 11th and 12th Lok Sabha. In 1999 he was elected as MLA from Sardarpura (Jodhpur) assembly constituency. He won three assembly elections back-to-back.

Ashok Gehlot was born on May 3, 1951 at Mahamandir, Jodhpur. He belongs to a Mali Gehlot family in Jodhpur. Gehlot has finished his graduation in Science and Law, and Masters in Economics.

In 1971 during the liberation war of Bangladesh, Gehlot has served in the refugee camps at several places including Bangaon and 24 Parganas districts, West Bengal.

He was an active parti cipant in the camps organized by the Tarun Shanti Sena at Sevagram, Indore, Aurangabad, and Wardha.

Gehlot is founder of the Bharat Seva Sansthan, which aims to render ambulance services and books free of cost through the Rajiv Gandhi Memorial Book Bank. Gehlot is the Chairman of the Rajiv Gandhi Study Circle, Delhi. This organization looks after the interests of students and teachers at university- and college-level.