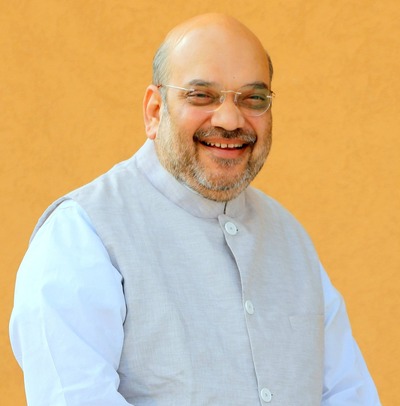 Amit Shah (Amitbhai Anilchandra Shah) was born on 22 October, 1964. He was born to a wealthy Jain family in Mumbai. His father Anilchandra Shah used to run a business dealing in PVC pipes. Amit Shah completed his schooling in Mehsana and pursued his graduation in bio-chemistry from CU Shah Science College in Ahmedabad. He joined the Rashtriya Swayamsevak Sangh (RSS) at the age of 14.

Amit Shah handled his father's business for some time. He briefly worked as a stock-broker and also with co-operative banks in Ahmedabad.

Turnaround of the Cooperative Bank
Amit Shah was appointed as the president of the Ahmedabad District Cooperative Bank (ADCB) in 2000. The ADCB was in deep trouble and required visionary leadership. The bank had suffered a loss of around Rs. 36 crore and was on the verge of shutting down. Amit Shah took charge of the bank and turned its fortunes within a year's time. It recorded profits of Rs. 27 crore the next year. Amit Shah also ensured that most of the bank's directors remained loyal to the BJP.

Amit Shah is married to Sonal Shah. The couple has a son Jay Shah.

Amit Shah joined the Rashtriya Swayamsevak Sangh (RSS) at the age of 14. He used to attend local shakhas (branches) of the RSS. Shah became a volunteer for RSS in his college days. He met Narendra Modi for the first time in 1982. During those years, Narendra Modi was a RSS pracharak (promoter) working as the in-charge of the youth activities in Ahmedabad.

The same year, Amit Shah became the secretary of the RSS' student body Akhil Bharatiya Vidyarthi Parishad (ABVP). He joined the BJP in 1986. A year later, Amit Shah became an activist with BJP's youth wing Bharatiya Janata Yuva Morcha (BJYM) and gradually rose through the ranks of the party. He went on to hold various important posts within the party such as state secretary, vice president and general secretary, among others. Amit Shah campaigned for senior BJP leader L.K. Advani who contested the 1991 General Elections from Gandhi Nagar parliamentary constituency in Gujarat.

In the mid 1990s, BJP formed the government in Gujarat with Keshubhai Patel as the chief minister. At that time, the Indian National Congress was highly influential in the rural areas of Gujarat. Amit Shah, along with Narendra Modi, was given the responsibility by the party high command to undermine Congress' influence in the state. Shah and Modi were able to convince a large number of people to join BJP. Many of these people had lost elections for the Village Chief's post in their respective villages.

Narendra Modi was appointed as the chief minister of Gujarat in October 2001 and Keshubhai Patel was removed by BJP high command on account of poor administrative performance. Consequently, Amit Shah also gained political prominence in the state. Both Modi and Shah managed to sideline their political rivals.

Amit Shah registered a thumping victory in the 2002 Gujarat Legislative Assembly Elections from Sarkhej assembly segment with a margin of close to 1,60,000 votes. Shah was given multiple ministerial portfolios simultaneously in the Narendra Modi government after his victory in the 2002 elections. In 2004, the UPA-led central government decided to repeal the Prevention of Terror Acts (POTA) law, but Amit Shah managed to get the Gujarat Control of Organised Crime (GCOC) Bill passed in the state assembly. Amit Shah also played a key role in the passing of the Gujarat Freedom of Religion Act which would make religious conversions difficult. The bill faced a lot of opposition but Shah defended it successfully.

Amit Shah's political career was infused with a new life after BJP's thumping victory in the 2014 Indian General Elections. Narendra Modi's accession as the Prime Minister of India increased Shah's influence in the party. Amit Shah was chosen by the then party president Rajnath Singh as in-charge for Uttar Pradesh. He was appointed as the party's General Secretary.

Under Amit Shah's supervision, BJP did exceptionally well in Uttar Pradesh registering victory by occupying 73 out of 80 parliamentary seats in the state. The party high command praised him for his strategic and organisational abilities.

In July 2014, he was unanimously appointed as the BJP's national president replacing veteran party leader Rajnath Singh. He was re-elected to the post unanimously in January, 2016.

Amit Shah was in the middle of a major controversy when he was accused of orchestrating the killings of Sohrabuddin Sheikh, his wife Kauser Bi and his accomplice Tulsiram Prajapati. According to the CBI, two Rajasthan-based businessmen paid Amit Shah to get rid of Sohrabuddin who was harassing them. The reports of the case suggest that the killings were planned and the criminals were gunned down in an extrajudicial encounter in which Amit Shah, DIG DG Vanzara and SP Rajkumar Pandian were allegedly involved. But Amit Shah denied the allegations accusing the Congress of remote controlling the CBI to falsely implicate him. Amit Shah, along with DG Vanzara, was allegedly involved in the Ishrat Jahan fake encounter case but the CBI gave him a clean chit.

Amit Shah was reportedly accused of tampering with evidences and influencing witnesses in the 2002 Gujarat Riots and also illegally passing orders of spying on a woman in connection with the Ishrat Jahan fake encounter case. The Opposition demanded a probe to be carried out under the 'Snoopgate' case. But in May 2014, the woman testified in the court that the surveillance on her was based on personal request. She urged the court to stop any further investigations to maintain her privacy. Amit Shah called the accusations a political propaganda against him by the opposition parties.

Amit Shah is known for his statements that has promoted hatred and ill-will between religions. In April he had spoken to Hindu residents in Muzaffarnagar, in western Uttar Pradesh, calling on them to use their votes for the sake of getting ?revenge? at the ballot box. This has led the cruel violence between Hindus and Muslims in September 2013 when over 40 people were killed and tens of thousands were displaced.

Amit Shah, who was considered the perfect successor to Narendra Modi as the Chief Minister of Gujarat, was arrested in the Sohrabuddin Fake Encounter case on 25 July, 2010. He faced a number of charges including murder and extortion. This dented his claim for the CM's post. He subsequently applied for bail but the CBI said that he might influence the investigations. Shah was granted bail in October, 2010 but was barred from entering Gujarat. Two years later, Amit Shah was allowed to enter Gujarat by the Supreme Court. This enabled Amit Shah to contest the 2012 Gujarat legislative Assembly elections and he won from the Naranpura constituency.