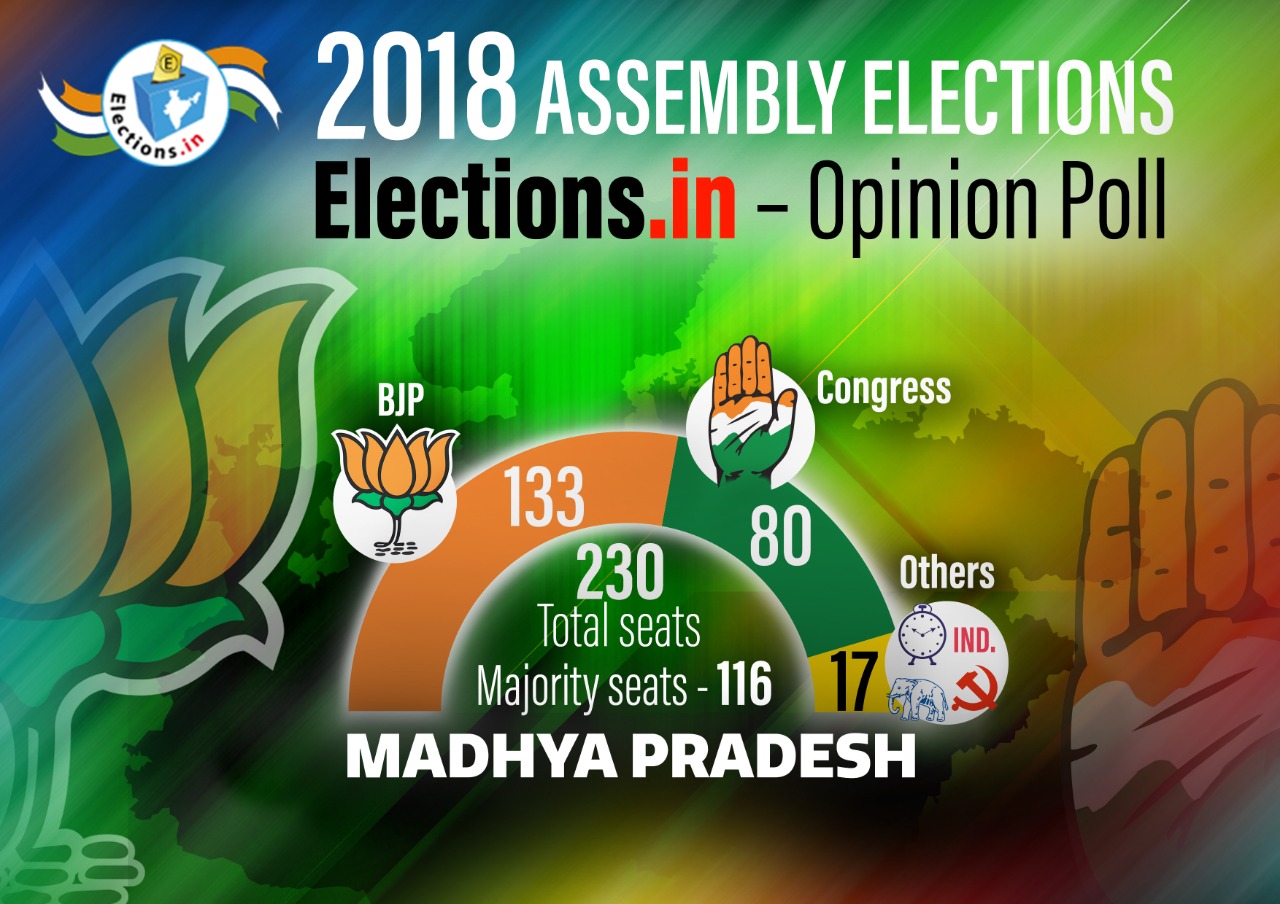 Shivraj Singh Chouhan is all set to represent the Madhya Pradesh government this time also. It would be fourth term for Chouhan since he is in power from last 15 years. An opinion poll conducted by elections.in suggests that Madhya Pradesh may once again see BJP government.

According to the opinion poll 2018 conducted by elections.in, BJP may get 133 seats out of 230 while Congress may win 80 seats, BSP may receive +7 seats and others may get 10 seats. These Big Three parties are still devising a way to checkmate each other.
MP will return BJP for the very reason it is getting rejected in Rajasthan. Shivraj Chouhan's rootedness, and accessibility has blunted a 15-year anti-incumbency. Over the last 10 years people are quite satisfied with Shivraj Singh efforts. MP has made a remarkable progress in terms of electricity, somewhat better education system, better health care and rural welfare schemes. But when we look at the Congress part, it is quite disappointing. Since Congres's inability to bring a genuine challenger to the fore is another reason why BJP is at the top of the chart. BSP will hurt Congress in Chambal and Bundelkhand. In spite of relative inefficiency of the Government and some disappointment in the BJP's core group at BJP's neglect of the Core Hindu Issues, Shivraj Singh Chouhan's public connect will win the day for BJP in Madhya Pradesh. Chouhan's impact on public and his ground work paying results now. No strong contender could challenge the popularity and think of rooting BJP in Madhya Pradesh in the time to come. Madhya Pradesh public is quite convinced with Shivraj's work and spirit. This time too unemployment, development and corruption are the issues on which the public of the state would be voted for. If we look at the past, in 2013 elections BJP had won 165 seats, Congress settled for 58 seats and BSP got 4 seats.
As per elections.in, BJP may get 133 seats, Cong 80, BSP+ 7, and others 10 seats in assembly elections 2018. NDTV' s opinion poll suggests that BJP may get 126 seats, Congress 97 seats and others 07 seats. ABP news opinion suggests that BJP may get 108 seats, Congress may win with 122 seats. Here India TV opinion poll suggests that BJP may get 133 seats, Congress may grab 85 seats, BSP may get 8 seats and others may get 9 seats.