Number of Assembly Constituencies for By-Poll 2019

Name of Assembly Constituencies for By-Poll 2019

There are three clear vacancies in the Lok Sabha from Parliamentary Constituencies of Karnataka, which need to be filled up: 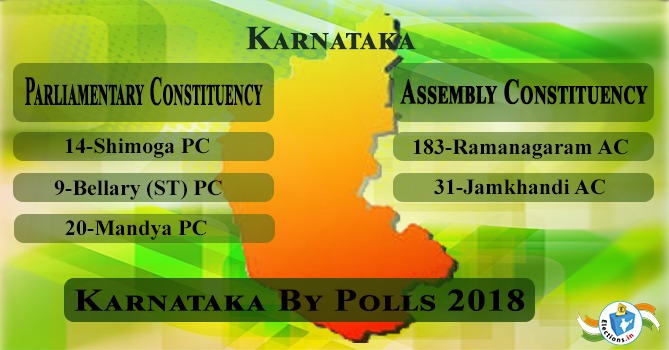 After taking into consideration various factors weather conditions etc., the Commission has decided vacancies as per the programme mentioned as under:-

The Electoral Rolls for all the aforesaid Lok Sabha and Assembly Constituencies have been finally published w.r.t 01.01.2018.

Electronic Voting Machines (EVMs) and VVPATs
The Commission has decided to use EVMs and VVPATs in the bye-elections in all the polling stations. Adequate numbers of EVMs and VVPATs have been made available and all steps have been taken to ensure that the polls are conducted smoothly with the help of these machines.

Names of BJP Leaders who will campaign for BJP Candidates for Bye- Elections to the 14-Shimoga, 9-Bellary (ST) & 20-Madhya Parliamentary Constituencies and 183-Ramanagaram & 20-Jamkhandi Legislative Assembly Constituencies in K ARNATAKA

Opinion: Congress’s Own Goal in Rajasthan


Around 30 MLAs of Congress and some independent MLAs have pledged their support to Sachin Pilot. As the latest developments follow, Sachin Pilot is on the verge of leaving Congress. Read More…

Congress is Having a Tough Time Keeping Rajasthan Govt


The possibility of some big news coming out of Rajasthan had emerged in the last month only. Congress CM Ashok Gehlot is repeatedly accusing BJP of destabilizing his government. The Read More…


Bihar Election 2020 is expected to take place around October-November this year. Before that, many political activities are taking place in Bihar. The recent one is the tussle between the Read More…