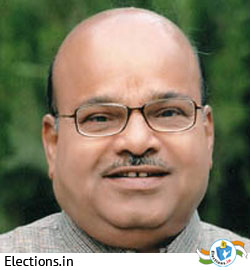 The most noticeable face of BJP for the Scheduled Castes, Thawar Chand Gehlot was appointed as the Cabinet Minister in the Ministry of Social Justice and Empowerment in Narendra Modi's government. He represents the constituency of Shajapur in Madhya Pradesh.

He was born in Rupeta village on May 18,1948. The village is situated in the Ujjain district of Madhya Pradesh.Though belonging to a dalit community, Gehlot pursued his graduation from Ujjain. He is married to Anita Gehlot and the couple is blessed with a daughter and three sons.

Gehlot started his political journey as a student leader. Currently, the party's national general secretary, Gehlot's journey was not a smooth sailing. After taking charge as the Cabinet Minister, he said that the first preference of his ministry will be to work for the upliftment of the dalits and the poor. The decision to include Gehlot in the Cabinet is seen as a representation of the backward sections of society.

A party loyalist, Gehlot has occupied various positions in the party. Moving a step higher in the ladder of success from being a student leader, he was elected to the legislative assembly of Madhya Pradesh thrice. The next step was the Lok Sabha elections. He became the Member of Parliament between 1996 and 2009. Gehlot represented the Shajapur constituency. However he lost the 2009 General Elections.

The time when he was incharge of the Scheduled Caste Morcha of BJP, he worked for the social and economic upliftment of the backward classes. The determination to work for the welfare of the weaker sections of the society continues till date. Talking to the media after assuming charge as the Cabinet Minister he said that his ministry will work "for the social, economic and educational empowerment of scheduled caste, other backward classes, and persons with disabilities. The Department would also ensure implementation of schemes for senior citizen and schemes for drug prevention".

Gehlot also added that "all efforts will be made for proper implementation of schemes and ensuring that if there are any shortcomings in implementation, such shortcomings shall be attended too immediately and removed. In case schemes are not implemented properly, accountability shall also be fixed".

In the year 2013, Gehlot was elected as the member of the Rajya Sabha. He also held the post of central observer of BJP in Gujarat. Gehlot is working through various political organisations to help the oppressed social classes. The position of a Union Minister will definitely give a boost to his determination.

Gehlot's literary interests are prominent in the articles contributed by him for 'Vidhayani'. 'Vidhayani' is a quarterly journal published by the legislative assembly of Madhya Pradesh. Being actively involved in social work, he plays a major role in removing social ills and conservatism from the Indian society. Face of the dalits, Gehlot works for the exploited classes through the organisation called 'Balai Samaj'.