Track your constituency
Live News
Live News
PM, CM don’t work Without Seeking Nod of Gaming Industrialist Friends: Rahul in Chhattisgarh Deduction for Mortgage Interest. Taxpayers can express write-offs for real estate loan interest (HLI) under salaries tax and private evaluation. Get The Cash You Want for Unforeseen Expenditures The site’s character examination is helpful with regards to discovering the right match for you personally a people that are in search of exactly the same thing
Elections » Political Leaders » Teerath Singh Rawat Biography 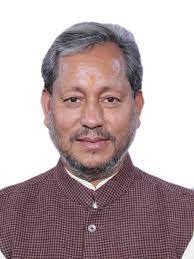 Tirath Singh Rawat is an Indian politician who served as the 9th Chief Minister of Uttarakhand, he was sworn-in as the new chief minister of Uttarakhand on March 10, 2021, replacing Trivendra Singh Rawat. The oath of office was administered on Rawat by Uttarakhand Governor Baby Rani Maurya at a simple ceremony held at the Raj Bhavan here in the presence of a host of dignitaries. He was elected to the Lok Sabha, lower house of the Parliament of India from Garhwal, Uttarakhand in the 2019 Indian general election as member of the Bharatiya Janata Party.

When the state of Uttarakhand was formed in 2000, Tirath Singh Rawat became its first education minister. He was the party chief of Bharatiya Janata Party Uttarakhand from 9 February 2013 to 31 December 2015 and former member of Uttarakhand Legislative Assembly from Chaubattakhal constituency from 2012 to 2017.

He was born and brought up in a small village named Seeron in Pauri Garhwal district of the Himalayalan state, Uttarakhand. His father was Kalam Singh Rawat and mother Gaura Devi. He received his M.A in sociology from Birla campus srinagar, Hemvati Nandan Bahuguna, Garhwal University Uttarakhand. He married his current wife (Rashmi Tyagi) on 9th december 1998 and has a daughter Lokanksha Rawat.

From his early days Mr. Rawat always had an interest in social service, he was active in Akhil Bharatiya Vidyarthi Parishad and entered in full time politics through student movements. He has been associated with the Rashtriya Swayamsevak Sangh, and worked as pracharak. He is an early member of Bharatiya Janata Party and was jailed for 2 months for his participation in Ram Mandir Aandolan. Mr. Rawat was part of the Uttar Pradesh Bharatiya Janata Yuva Morcha, the BJP's youth wing, where he served as the state vice-president for some time before being elected to the Uttar Pradesh Legislative Council in 1997, he was also involved in the struggle for separate Uttarakhand state. And when Uttarakhan got the separate identity from Uttar Pradesh, Mr. Rawat became education minister in its first government from 2000 to 2002.

He has also served the Bharatiya Janata Party as the president of Uttarakhand state unit and national general secretary in 2007. Later he served as MLA from Chaubattakhal constituency in Uttarakhand from 2012 to 2017. In 2017 he became BJP’s National secretary.

In match 2021 after taking charge of CM of Uttarakhand, Mr. Rawat made a controversial remark against the practice of women wearing “ripped jeans”. He made the alleged misogynist comment in his speech at a workshop organised by the Uttarakhand state commission for protection of child rights in Dehradun. Recalling an anecdote, Mr. Rawat stated that he was stunned upon seeing a woman who runs an NGO, wearing a pair of ripped jeans and was worried about the precedent she was setting for the society. Later he sent an apology saying that he is apologetic if he had hurt anybody's feelings but stood by his statement and said that wearing ripped jeans is ethically wrong.

A few days after sparking controversy with his statement about women wearing ripped jeans, he sapked another contovercy by saying that people should have given birth to more children if they want more ration.

When other states were exploring containment measures following a fresh surge in Covid-19 cases, CM Rawat insisted that the Kumbh Mela in Haridwar should be “open for all".