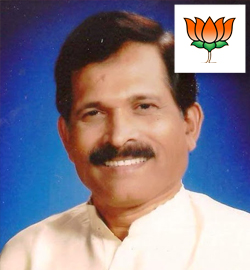 Shripad Yasso Naik, a great Indian politician and the MP from the constituency of North Goa, is the Minister of State with Independent Charge for Culture and Tourism in the Modi government. He took charge on May 27, 2014. He is the member of the Bharatiya Janata Party (BJP).

Naik was born in a Bhandari community on October 4, 1952. It was a middle-class family in the village of Adpai in the district of North Goa. He was born to Yesso Bhikari Naik and Jayshri Yesso Naik. He completed his graduation from Bombay University and later in life decided to enter into the political arena. He is married to Vijaya and the couple has three sons.

A businessman by profession, Shripad Yasso Naik started his political career as the General Secretary of the BJP in Goa. Soon, he rose to the position of the party president. Naik was also the member of the Legislative Assembly of Goa. He was for the first time elected as the member of Lok Sabha in the year 1999 from the Panaji constituency of Goa. He managed to retain his seat and was re-elected to the Lok Sabha in 2004, 2009 and 2014.

Naik won the 2014 General Elections with a huge margin of 105000 votes. After assuming charge as the Tourism Minister in the newly-formed NDA government, Naik said that “The efforts of the new tourism ministry will be directed at developing tourism infrastructure in the country so as to provide a boost to the sector”. He further added that the visa and security issues will be taken care of and the tourism sector will be developed in such a way that a tourist feels secured while coming to India. "There are some incidents in the past which have created a bad name for the country. We need to address that; a tourist should feel safe here," he said. Hailing from Goa, a popular tourist destination, he is well aware of the problems the tourists face. In order to encourage tourism in the country, Naik recently said that all the impediments that restrict the flow of tourists in the country will be removed. Talking to the media, he said that the security of tourists will be the priority for his ministry.﻿

During his political career, Naik has occupied many important positions in the government. He was the member of the consultative committee in Ministry of Tourism and Ministry of Urban Poverty Alleviation. While he was the member of the 13th Lok Sabha he served in several positions as the State Union Minister such as Agriculture, Shipping, Civil Aviation, Road Transport & Highways and Finance (Revenue).

The journey from the State Union Minister to the Minister in Modi's cabinet was long and not easy for Naik. It was his determination that led him to this position.

An avid traveller, he has been to many countries like Brazil, UK, France, Thailand and the US. Interested in social and cultural activities, Naik is associated with many cultural organisations. Now this may come as a shock to most of the people – Naik is a state-level Kabadi player and also a swimming champion. Apart from that, he also won the gold medal in racing and a silver in shooting. No doubt, he is an all-rounder in the field of sports.