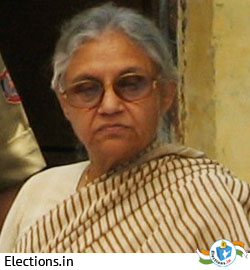 Sheila Dikshit is a well-known figure in Indian politics who belongs to the Indian National Congress party. A powerful administrator and leader, she has been elected Chief Minister of Delhi thrice since 1998. She has a record of leading her party to three consecutive victories in New Delhi constituency in the Legislative Assembly of Delhi. Sheila Dikshit is the second female Chief Minister of Delhi after Sushma Swaraj.

Sheila Dikshit was born on March 31, 1938 in Kapurthala, Punjab. She completed her schooling in the Convent of Jesus and Mary School, New Delhi. She did her Masters in History from Miranda House College of University of Delhi. She is also a Doctor of Philosophy from the University of Delhi. Her husband, Late Vinod Dikshit worked as an officer in the Indian Administrative Services (IAS). Sheila Dikshit has one son, Sandeep Dikshit, and one daughter, Latika Syed. Sandeep Dikshit is a member of the Indian National Congress. He was also a Member of Parliament (MP) in the 15th Lok Sabha of India.

In the 1970s, Sheila Dikshit was the chairperson of the Young Women’s Association. During this period, she helped set up two of the most successful working women’s hostel in Delhi. After that, Dikshit also worked for Garment Exporters' Association as an executive secretary.

Sheila Dikshit's entry into Indian politics was accidental. Late Uma Shankar Dikshit, her father-in-law, was a renowned activist during India's independence struggle. He later became a union cabinet minister in the Indira Gandhi government. Sheila Dikshit used to help her father-in-law a lot while he was serving in this position . The former Indian Prime Minister Indira Gandhi acknowledged her administrative skills and nominated Dikshit as an Indian delegate of the United Nations Commission on the issue of status of women. This marked her entry in Indian politics, which led her eventually to become the chief minister of Delhi.