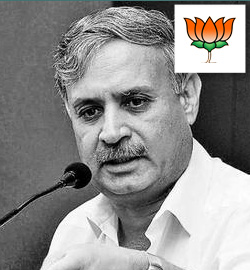 A former Congress leader, Singh joined the Bharatiya Janata Party (BJP) in February 2014. He has been involved in the politics of Haryana since a long time. A strong believer in democracy, he wants to work hard to take India further on the path of development.

Rao Inderjit Singh was a member of the Congress party for around 35 years. In 2014, he joined BJP and contested Lok Sabha elections from the constituency of Gurgaon on BJP ticket. Regarded as an 'opportunist' by all the critics, Singh blamed the internal politics within the Congress party for leaving the political party. He represented the party in Lok Sabha three times. He has also been a prominent leader of the Ahir(Yadav) community.

Moving a step ahead in his political career, he contested the Lok Sabha elections for the first time in the year 1998 and became the Member of Parliament. He was re-elected to the Lok Sabha in 2000, 2004, 2009 and in 2014. He won the elections of 2004 and 2009 from Mohindergarh and was appointed as the MoS in the Manmohan Singh government. Singh won the 2014 General Elections from Gurgaon constituency and attained the position in Modi's cabinet. He defeated Yogendra Yadav of AAP.

Rao also served as a member of the council of ministers under the UPA government where he acquired the position of the Minister of State for Defence Production. During his tenure, he encouraged domestic defence projects and gave a push to DRDO projects such as Arjun tank and LCA. While a Member of Parliament, he also held portfolios of Minister for the Environment, Forest, Medical and Technical Education. Rao was also the Chairman of the Parliamentary Information technology committee.

Rao Inderjit Singh asked for an inquiry into Robert Vadra's land deals and also accused Chief Minister Bhupinder Singh Hooda for being involved in favouritism while giving funds for the development of various districts. This may be regarded as the reason for his leaving the Congress party. He started ?Insaaf Manch? to get involved with the public and sort out their issues.

Talking about the upcoming assembly elections with the media, Rao said that the utmost priority of the BJP at present is to win the elections in Haryana. He said, "Elections are going to take place in four states, and possibly they will happen on the same day. Haryana is one of them. The party's priority is to win in Haryana. In my understanding, the strategy has already been made for it." He is completely dedicated to the welfare of the people of Haryana. At times, he is also regarded as 'farmer's son'. He has initiated many schemes to provide proper educational facilities in the rural sector. He established a number of schools and universities.

An energetic person and an avid sportsperson, Rao Inderjit Singh was a member of the Indian shooting team from 1990 to 2003. He also grabbed a bronze medal at the Commonwealth shooting championship. Rao for three consecutive years became a National Champion in Skeet. He received three gold medals in the SAF Games. When not involved in political work, Rao loves to explore nature.