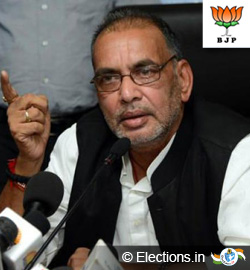 Radha Mohan Singh, a famous Indian politician and a member of the Bharatiya Janata Party (BJP) became the Cabinet Minister in 2014. On May 27, he was appointed as the Minister of Agriculture under Modi's prime ministership. He has been associated with Bihar politics from a very long time.

He was born in Narha Panapur on September 1,1949. The place is situated in the East Champaran district of Bihar. He pursued his graduation from Bihar University, Motihari. He is married to Shanti Devi and the couple is blessed with a daughter and a son. Since childhood he has been an active member of RSS Swayamsevak.

Radha Mohan Singh made his entry into politics as a student leader in 1967. He was elected as the Nagar Pramukh of Akhil Bharatiya Vidyarthi Parishad (ABVP).Throughout his life he has been the member of Jan Sangh and BJP. His hard work for the party always went un-noticed and unacknowledged. But in the year 2014, Singh witnessed an unexpected twist in his career when he got the place in Modi's cabinet. The years of efforts and dedication was finally rewarded.

Climbing the political ladder, Singh served as the MP from Motihari, Bihar five times since 1989. This is an indication of people's love for their leader. It is Singh's efforts to work for the welfare and development of the people of Bihar, that gets him elected again and again. He was re-elected to Lok Sabha in 1996, 1999, 2009 and for the fifth term in 2014.

Throughout his political career, Singh has been considered as an organisational man. His party members have always praised him for his contribution and dedication towards the party. Recognisiing his efforts, he was elected as the party chief of the state from 2006 to 2009. He contributed immensely in the growth of the party.

During his political stint, he occupied many positions in the government. Apart from being the party chief, he served as a member of the Consultative Committee of the Communication Ministry and of the Standing Committee on Industry and Mines while he was a member of 9th Lok Sabha. He subsequently became the party's General Secretary in Bihar. Now there was no looking back for Singh. His career graph kept accelerating which finally led him to the position of the Cabinet Minister.

In his following stints as a member of Lok Sabha, Singh served as the member of various committees like that of Railways, Communications, Petroleum and Natural Gas, Surface Transport and External Affairs.

Looking at his devotion for the party, the BJP decided to give him more authority and he was made the Vice-President of the party's Kisan Morcha and incharge of Uttar Pradesh and Uttarkhand party units. Finally, he made his place in the Modi cabinet by winning 2014 General elections from the Purvi Champaran constituency of Bihar. After assuming charge, he said "Our main priority will be to empower farmers of the country".

Actively involved in social work, Singh works for the welfare of backward classes and oppressed. He also participates in various social and cultural activities and is the President of Vaidyanath Seva Trust. A great fan of cricket, he was also the Vice President of the Association of Bihar Cricket.