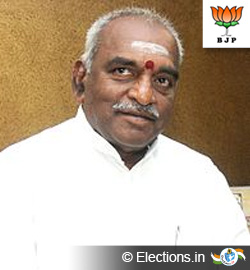 Pon Radhakrishnan is the Union Minister of State (MoS) for Road Transport & Highways and Shipping. During the November 2014 cabinet reshuffle, he was shifted to this new portfolio from the Ministry of Heavy Industries & Public Enterprises in the Narendra Modi government at the Centre.

During May 2014, ‘Pon Rji’ or ‘Ponnar’ (as he is known popularly in the political fraternity) became the only Bharatiya Janata Paty (BJP) MP – having won from the Kanyakumari Lok Sabha constituency – to be included in the Union Government from Tamil Nadu.

Radhakrishnan has been Tamil Nadu BJP’s President. He was recently replaced by Dr Tamilisai Sounderrajan, National Secretary of the party. Radhakrishnan’s USP, as a politician, is his clean image.

Radhakrishnan is not only a graduate in Arts stream but also has a Law degree. He did his schooling from Nagercoil’s D.V.D.H. School and completed his graduation from Virudhu Nagar’s VHNSN College. He then went on to complete his Law degree from Chennai’s Madras Law College. A lawyer by profession, social activist, and full time politician, Radhakrishnan has chosen to remain unmarried.

During 1990s, he got attracted to a rightist organisation Hindu Munnani and started working at the grassroots level. He first contested parliamentary election in 1999 as a BJP candidate from Nagercoil and won the election. He was inducted as MoS for Youth Affairs and Sports during the first NDA regime under the stewardship of Atal Bihari Vajpayee. He retained this portfolio from September 30, 2000 to January 29, 2003. Subsequently, he was made MoS for Urban Development and Poverty Alleviation and this tenure lasted from January 30, 2003 to September 7, 2003. Pon also became MoS for Road Transport and Highways on September 8, 2003.

However, he lost the elections twice – first in the year 2004 and later in 2009. Ultimately, he regained the trust of people and won the Lok Sabha election from Kanyakumari seat by defeating his nearest contender by more than one lakh votes in the 2014 General Elections.

In his present ministry, Pon Radhakrishnan seems to be on a working overdrive. He has already reported many explorations and development works to the Parliament. Some of the most important ones include alternative route exploration for making Sethusamudram ship channel project a success, the highway projects completed vis-a-vis target, steps undertaken for increasing coastal movement of cargo in India, moving ahead with the Sagarmala project (including development of CERs, efficient evacuation, port modernisation, etc, which will need investment to the tune of Rs 5,000 crore), development of coastal economic zones, and many more.
WBDB16.12.2014
EBVD