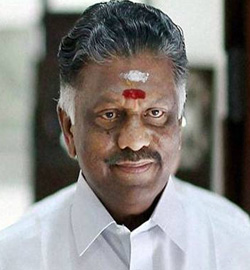 Earlier, Panneerselvam, who had started his career as a tea stall owner, held important portfolios in Jayalalitha’s cabinet – Public Works, Revenue and Finance. O. Panneerselvam was the first CM of Tamil Nadu who belonged to the Thevar community, which is one of the largest and loyal vote banks of the AIADMK, and was seen by many as one of the main reasons Jayalalithaa selected a person from this community.

Panneerselvam was born on 14 January, 1951 in Periyakulam, Tamil Nadu. He started his career as a tea stall owner. He also owned some agricultural land. Though the Tamil Nadu assembly website says that he is a graduate, many notable quarters maintain that he had passed Class 12 but couldn’t complete his graduation at Haji Karutha Ravuthar Kavuthiya Arts College, Uthamapalayam, due to several reasons. He is married to P. Vijayalakshmi and the couple is blessed with three children.

The 64-year-old started his political career by becoming the chairman of Periyakulam Municipality in 1996 and fulfilled his responsibilities till 2001. It was in 2001 that he contested as an AIADMK candidate from the Periyakulam Assembly constituency and won. A staunch ‘Amma’ loyalist, he became the Revenue Minister in her government and held the office from 19 May 2001 to 1 September 2001. It was during this time that Jayalalitha was barred by the Supreme Court from holding the CM’s office as she was convicted in the TANSI land scam. She chose O Panneerselvam to hold the Chief Minister’s office. The tenure lasted for six months, from 21 September 2001 to 1 March 2002. Dramatic enough, Panneerselvam never sat on the CM’s chair, similar to what ‘Bharat’ did in the absence of 'Ram' in the epic Ramayana. During those six months, his government was accused of being a ‘puppet government’, micro-managed by Jayalalithaa.

Once Jayalalithaa’s conviction was overturned by the apex court of India, O. Panneerselvam made way for Jayalalithaa by resigning from the CM’s position on 1 March 2002. From 2 March 2002 to 13 December 2002, he was the Minister for Public Works, Prohibition and Excise. Subsequently, he was also entrusted with the Revenue department’s charge from 13 December 2002 to 2006. For two weeks in May 2006, he also served as the Leader of the Opposition in the Tamil Nadu assembly and was also selected as the leader of the AIADMK legislative party. He was again entrusted with the responsibility of being the Chief Minister of Tamil Nadu on 27 September, 2014 when Jayalalitha was convicted in the disproportionate assets case. In 2015, after getting acquitted in the Disproportionate Assets case, Jayalalithaa took over as the state's CM. In the 2016 Tamil Nadu Assembly elections, the AIADMK returned to power and Jayalalithaa became the chief minister of Tamil Nadu for the record sixth time. Panneerselvam was appointed as the Finance Minister in Jaya's cabinet. When she succumbed to a major cardiac arrest in December, 2016, Panneerselvam was chosen as her successor.