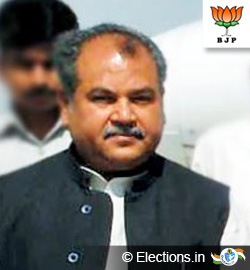 The Union Minister of Steel, Mines, Labour and Employment in the Modi government, Narendra Singh Tomar has become the cabinet minister for the second time in the NDA government. In 2003, he was the cabinet minister in the Madhya Pradesh government. ﻿Apart from being a prominent politician, Tomar is actively involved in social welfare programmes like blood donation camps, plantation programmes and helping the needy.

Belonging to a highly educated family, Tomar was born on June 12, 1957 in Morar village of Gwalior in Madhya Pradesh. He was born to Munshi Singh Tomar and Sharda Devi Tomar. Tomar graduated from Jiwaji University. He is married to Kiran Tomar and has a daughter and two sons.

Narendra Singh Tomar made his inroads into politics in the year 1980. He was appointed as the President of BJP Youth Forum in Gwalior. The BJP head of Madhya Pradesh, the political career of Tomar has always been an upward movement. Starting as a municipal councillor, today he has reached the position of a Cabinet Minister.

Tomar has occupied various positions in the BJP and also played a key role in the party's victory in the Lok Sabha elections. His dedication and hard work led the party win 27 Lok Sabha seats out of 29. He was elected as the Member of legislative Assembly (MLA) of Madhya Pradesh twice between 1998 and 2008. He won the assembly elections from Morena constituency. Tomar became the union minister in 2003 and held portfolio of rural development. In 2006 he was appointed as the party president of Madhya Pradesh.

The rise in his political career continued. In 2007, Tomar was elected to the Rajya Sabha. He won the 2014 General Elections from Gwalior and thus secured his position in the Modi cabinet. After taking oath as the Cabinet Minister, Tomar said he "will soon have a meeting with senior officers in the ministry to chalk out the 100 day road map for action as stipulated by the Prime Minister". He further added that "emphasis will be on imparting skill development with avenues of employment".

A strong follower of BJP, Tomar has a clean image. He has never been involved in any kinds of scandals and has no criminal records in his account. Rising steadily and swiftly in his career, Tomar always shared a harmonious relationship with the RSS. He was called 'Munna Bhaiya' by Babulal Gaur.

Tomar's interest in sports, led him to become the President of Darpan Sports Sansthan. Apart from his fascination in sports, his literary interests are also quite evident. To encourage artists, Tomar organises many poetic symposiums. He is also involved in many social and cultural activities.