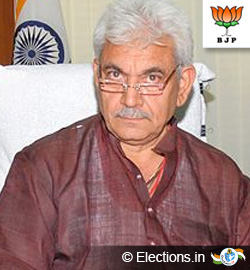 Born on July 1, 1959 in Mohanpura in the Ghazipur district of Uttar Pradesh, Sinha did his B.Tech in Civil Engineering from the prestigious Indian Institute of Technology (BHU), Varanasi. Later he also completed his M.Tech in Civil Engineering from the same Institute. Before joining active politics, he was a member of the General Council, School of Planning during 1999-2000. He has also been a Member of Committee on Energy and another Committee on Government Assurances.

An agriculturist at heart, Sinha has been actively involved in working in backward villages where his interests primarily lie. Travelling is his another area of interest. His wife Neelam Sinha belongs to Maghara Bihar Sharif in Bihar’s Nalanda district and the couple is blessed with a son and a daughter.

Travelling has been a passion of Sinha and he has widely traveled. Social work also has been his another passion in life.

Political career of Sinha had an impressive start when he became the president of the Banaras Hindu University Students Union in 1982. And then in 1996 and 1999, he was elected to the Lok Sabha. He has been a member of BJP national council too from 1989 to 1996. In the recent 2014 elections, he has been elected to Lok Sabha and it’s his third term in the national politics. Earlier he was elected to Parliament in the years 1996 and 1999. Sinha has been among the best performing members of Parliament and in the 13th Lok Sabha he was praised for a very high attendance and for asking several questions pertaining to various topics of public interests.

Recently, the leading magazine India Today has counted him among the seven most honest members of Parliament. Significantly, Sinha has set a rare example amongst his counterparts when he successfully utilised all the money allotted to him as an MP for public welfare.

Significantly, Sinha announced Rs 250 crore package for the improvement of facilities and the expansion of Cantt Railway Station in Varanasi. Unlike most of the earlier railway ministers, he places great emphasis on completing the old projects first before announcing any new venture . While speaking at a recently held event, he showcased his strong willingness of speeding up reforms in railways and that he would not hesitate taking some tough steps for its restructuring work.

Another area of concern for the Sinha in railways has been the paucity of manpower in the light of his upcoming plans of introducing various new trains year on year. As per an estimate that he brought into light, over 2.25 lakh vacant posts in railways are required to be filled immediately.

According to Sinha, his reform measures are focused at induction of new technologies in the railways so that its capacity can be augmented with increase in freight share and improvement in passenger facilities.
[an error occurred while processing this directive]
Political Leaders
Election Results
Government of India
Political Parties
Elections in India
Election Commission of India
Chief Electoral Officers
General Elections Results