Track your constituency
Live News
Live News
PM, CM don’t work Without Seeking Nod of Gaming Industrialist Friends: Rahul in Chhattisgarh Deduction for Mortgage Interest. Taxpayers can express write-offs for real estate loan interest (HLI) under salaries tax and private evaluation. Get The Cash You Want for Unforeseen Expenditures The site’s character examination is helpful with regards to discovering the right match for you personally a people that are in search of exactly the same thing
Elections » Political Leaders » kiran-bedi 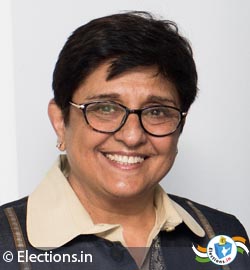 Kiran Bedi is an Indian politician belonging to the Bharatiya Janata Party (BJP). She is currently the Lieutenant Governor of the union territory of Puducherry. Bedi took to politics after retiring from Indian Police Service (IPS) in 2007. She was the first Indian woman to join the officer’s ranks of IPS in 1972. During her stint in the IPS, she had served in the position of the Director General at the Bureau of Police Research and Development. Bedi is also noted for her role as a social activist. The winner of the Magsaysay Award in 1994, Kiran Bedi has been one of the active members of the Anna Hazare-led civil society that launched a movement for the enactment of a strong anti-corruption law, the Jan Lokpal Bill. She formally joined the Bharatiya Janata Party (BJP) on 15 January, 2015 and was selected as the party's chief ministerial candidate for the 2015 Delhi Assembly elections.

Kiran Bedi was born in Amritsar, Punjab on June 9, 1949 to Prakash Lal Peshawaria and Prem Lata Peshawaria. She obtained her Bachelor of Arts in English (Hons) from Amritsar’s Government College for Women in 1968. She completed her Masters in Political Science in 1970 and was a topper in her class. In 1972, Kiran Bedi married Brij Bedi and has a daughter with him.

She earned her degree in law from the Faculty of Law, University of Delhi in 1998 while in service as the Director General of Police. Subsequently, she went on to obtain a doctorate from the Department of Social Science at the Indian Institute of Technology (IIT) Delhi in 1993.

Kiran Bedi did not start her career as a cop, but as a lecturer of Political Science at the Khalsa College for Women in Amritsar in 1970. After two years of her teaching career, she cleared the Civil Services examination and became an IPS officer. This made her the first woman in India to join the services.

During her career in Indian Police Service, she served as the chief of New Delhi Traffic Police, DIG of Police in Mizoram, Advisor to the Lt. Governor of Chandigarh, Director General of Narcotics Control Bureau, and Civilian Police Advisor for United Nations Peacekeeping operations. She was honoured with the United Nations Medal for her work.

Kiran Bedi introduced a number of reforms in the management of Tihar Jail, Delhi when she was the Inspector General of Prisons during the years 1993-1995. The various programmes introduced by her under this mission witnessed positive changes in the lives of prisoners. This short stint of her is remembered as a golden period in the history of the prison and won her the Ramon Magsaysay Award for 1994 and the Jawahar Lal Nehru Fellowship. The last position that Kiran Bedi held in the IPS was that of the Director General of India's Bureau of Police Research & Development. She was awarded an honorary degree of Doctor of Law in acknowledgment of her “humanitarian approach to prison reforms and policing” in May 2005. Two years later, Kiran Bedi decided to voluntarily retire from the police services and the Government of India granted her permission to do so. On December 25, 2007, she retired to dedicate herself to social issues.

In 1987, Kiran Bedi launched an NGO named Navjyoti India Foundation (NIF). This NGO aims at de-addiction and rehabilitation of the drug addicts and has expanded to other social issue like illiteracy and women empowerment. She also started India Vision Foundation in 1994 that has been working for police reforms, prison reforms, women empowerment and rural and community development. She was also the host of TV programme 'Aap Ki Kachehri' that aimed to resolve the family disputes of citizens.

In August 2011, Kiran Bedi joined the India Against Corruption movement led by social activist Anna Hazare. She was a prominent face of the movement along with Arvind Kejriwal but parted ways with him when the latter decided to establish a political party Aam Aadmi Party (AAP).

Before the 2014 General Elections, Bedi put her weight behind Narendra Modi as the preferred Prime Ministerial candidate. On 15 January 2015, the BJP inducted Kiran Bedi into the party in the presence of its national president Amit Shah and Union Finance Minister Arun Jaitley. Bedi joined the party a day after she had talks with Prime Minister Narendra Modi.

Capitalising on Kiran Bedi's popularity among Delhiites and her past record as a 'super cop' of Delhi, the BJP designated her as the chief ministerial candidate for the Delhi assembly elections 2015. She was fielded from Krishna Nagar constituency which was a BJP bastion since 1993. The polling in Delhi was held on 7 February and the results were declared three days later.

The results of the elections translated into a near whitewash of BJP at the hands of its rival, the Aam Aadmi Party(AAP), reducing it to a mere three out of the 70 seats. Bedi lost to AAP's S.K. Bagga falling 2,277 votes short of him.