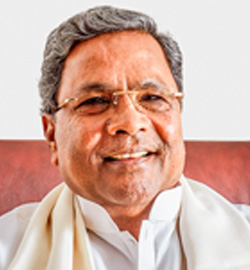 Siddaramaiah was the former CM of Karnataka and held the position from 2013 to 2018. This made him the first political leader in Karnataka to complete a full 5 year tenure in 40 years after D. Devaraj Urs. As a CM, he was known for his socialist and secular outlook. He is currently an important political figure of the Indian National Congress. Earlier, he served as a leader for JD(Secular) and was a Deputy CM for the state on two occasions.

Siddaramaiah was born in a farming family and could not start his formal education until the age of 10. But, later he completed B.Sc and Bachelor of Law from Mysore University. He is married to Parvathi and has 2 sons, an actor (passed away in 2016 due to multiple organ failure) and a doctor.

He was working as a junior lawyer until 1978, when he started his political career by contesting for the Chamundeshwari constituency on Bharatiya Lok Dal ticket. He entered the 7th legislative assembly elections for Karnataka and against the expectations of many, he won the seat, which earned him name and fame. In the 1985 mid-term polls, he got re-elected and became minister for veterinary services and animal husbandry. He got elected again in the 1994 state elections and held the position of Finance Minister in Deve Gowda-led JD government. He was also appointed as deputy CM in 1996. When Janata Dal split, he sided with Janata Dal(Secular), a faction led by Gowda, and went on to become the state president of the state unit. Later in 2004, when Congress and JDS formed a coalition, he was again made the Deputy CM.

However, he suffered an expulsion from the party following differences between him and Deve Gowda. He later joined Congress and won the by-polls in December 2006 in Chamundeshwari constituency, despite the aggressive campaigning by Deve Gowda. In 2013, he became the leader of Congress legislative party.

He later led Congress to victory in 2013 by winning with a majority in Legislative Assembly election held in 2013.