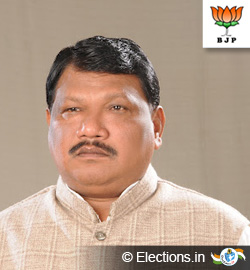 He was born in a tribal family of Kendudihi on March 22,1961. The place is situated in the Sundargarh district of Orissa. Though born in a poor family of tribals, Oram holds a degree in electrical engineering. Before joining politics, he worked with BHEL for almost five years. His family which comprises of two brothers and three sisters lived in a state of destitution. Looking at his family condition he decided to join politics and work for the upliftment of the poor.

A tribal leader, Jual Oram made his debut into politics in the year 1990. He made a history when he was elected as the first tribal minister of India under Vajpayee government. He was the sole winner of BJP from Odisha in 2014 General Elections. He managed to regain the constituency of Sundargarh which he lost in 2009 elections.

Oram won the assembly elections of 1990 for the first time from Bonai constituency. Then there was no looking back for him and his popularity kept rising. While he occupied the position of the President of state party unit in Odisha, Oram played a key role in strenghtening the position of BJP in the state. He was elected as a member of Lok Sabha four times in 1998, 1999, 2004 and 2014 from Sundargarh constituency. He lost the elections of 2009 only. In 1999, for the first time under the leadership of Atal Bihari Vajpayee, the tribal ministry was created and Oram was appointed as the Tribals Minister. It was like a dream come true for him. It was the biggest opportunity for him to work for the development of tribals. He initiated many schemes for the upliftment of the oppressed and weaker sections of the society especially tribals. He often visited them to be aware of the problems faced by them.

During his political career, he has occupied many positions. Not only has he served as the member of the Legislative Assembly of Orissa but also as the member of various committees in the union government. He was also appointed as the Vice President of BJP in 2013. Oram has always been praised for his humility by the party members. But at the same time he can be stern and takes a strong stand when it comes to the welfare of his people. He came into the public eye when he opposed Patnaik. Oram was against giving away the iron ore mine in the Khandadhar area in Sundargarh to the South Korean company Posco's steel project of worth $12 billion. He felt that it was against the interests of the tribals. Oram took such a step at the time when his party was in alliance with the BJD. This shows his commitment and dedication to his people.

In the 2014 Lok Sabha elections he defeated former hockey captain and BJD contestant Dilip Tirkey and thus secured the seat for BJP. This victory became the inroads for Modi's cabinet and became the Minister of Tribal Affairs. After assuming charge, he said "We have to now work for the upliftment of Tribals and try to meet the expectations of Millions of Indians who have reposed their trust & faith in Narendra Modi ji's Government".

Oram is a tech-savvy person and one of the few leaders with his own websites. He is also involved in social media, the way to connect with his supporters. Now this may come as a surprise to most of the people - Oram is a big fan of sports. He also likes to follow tribal culture and tradition. He also plays an important role in preserving the primitive tribal way of living.