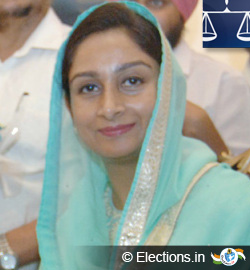 Harsimrat Kaur Badal is a strident and a determined Indian politician. She is presently the Minister of Food Processing in the Modi government. She belongs to Shiromani Akali Dal (SAD). Badal belongs to a famous political family of Punjab. Apart from being a great political leader, she is also involved in social work and is a business woman.

She was born in Delhi on July 25, 1966 in Majithia family to Satyajit and Sukhmanjus Majithia. After her schooling, Kaur entered into the field of textile designing and obtained a diploma in it. From here comes her good dressing sense. Majithias are always inclined towards business. Following her family interests, she went onto work as a business person in the buying company. What many people might be unawre of is that the most famous newspaper of Chandigarh, 'The Tribune' was founded by Majithias.

Talking about her family, Bikram Singh Majithia, Kaur's brother, is MLA from Majitha and is the Revenue Minister of the state of Punjab. She married Sukhbir Singh Badal, the president of SAD, in November 1991 and thus became the daughter-in-law of Parkash Singh Badal, the Chief minister of Punjab. The couple has three children and Badal is considered to be a stern parent in contrast to her husband.

Badal made her debut into politics in the general elections of 2009. She won the elections from Bhatinda constituency by defeating Raninder Singh of INC by a margin of 1.2 lakh votes. Being outspoken, she has been quiet vocal in the debates of Lok Sabha. In her first speech, after being elected, she raised the problems of the victims of Sikh riots of 1984.

She again contested from Bhatinda constituency in 2014 Lok Sabha elections. Badal was pitched against Manpreet Badal, her husband's cousin. As a part of her social activity, Badal, during her campaigning distributed bicycles to girls. It was to make travelling to school convenient for them. Badal won the elections on her own abilities and not because of her family name. Parkash Singh Badal did not even campaign for her. She defeated Manpreet Badal, the former Finance Minister of Punjab with a narrow margin of 20,000 votes. She was then appointed as the Food Processing minister in the Modi cabinet. During her first visit to Bhatinda after becoming the Cabinet minister, Badal announced that her priority is to put a restarint on food wastage.

She recently met Minister for Civil Aviation over the issue of Bhatinda airport's inauguration. The meeting was successful and the Minister assured Badal that the airport will be inaugurated soon.

What does Harsimrat Kaur Badal do apart from politics

Apart from being a political leader, Badal also handles the business empire of her husband. Badals have set up huge businesses in the hotel industry, media and agricultural sector. She also runs a business of jewellery in the Trident Hotel in Gurgaon. Her interest in business is a reflection of typical Majithia trait.

Badal is also a social reformer and actively involved in social issues. She initiated the project, 'Nanhi Chhaan' which means innocent lives. It talks about the rights of a girl and women empowerment. In order to impart education to street children, Badal runs a charitable school for them. She also supports a number of homes for the old and elderly.