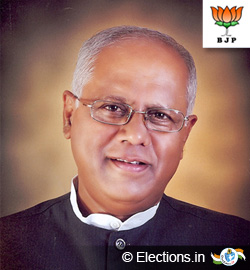 Gowdara Mallikarjunappa Siddeshwara, or G.M. Siddeshwara, is the new Minister of State for Heavy Industries and Public Enterprises in Prime Minister Narendra Modi’s cabinet. He belongs to a well-known political family of Karnataka. Just like his father, Late G Mallikarjunappa, Siddeshwara is also a BJP MP from the Davangere parliamentary constituency in Karnataka. In the current 16th Lok Sabha, it’s his third continuous term as an MP from this seat.

Born on 5 July 1952, and brought up in a farmer’s family, G.M. Siddeshwara did his matriculation from SSLC Sri Bheemeshwara Rural High School in 1966-67. He started following his father’s footsteps, who was a farmer by profession and actively worked for the welfare of poor villagers. The father-son duo has been credited with establishing strong foundation for the BJP in Davangere, which had traditionally been a Congress bastion for a very long time. They implemented several welfare plans by raising funds at the local level for the development of the constituency. Both of them earned praises from BJP stalwarts like Atal Behari Vajpayee, Lal Krishna Advani as well as the villagers of the constituency. His father served as an MP for two terms — 1996-1998 and 1999-2003.

Married to GS Gayithri, Siddeshwara is blessed with a son and a daughter.

Siddeswara entered active politics after the demise of his father in 2003 and registered a tremendous victory in the 2004 Lok Sabha elections from the Davangere constituency on the BJP’s ticket. In the current Lok Sabha, he has won for the third time, defeating his Congress rival in Davangere. He was earlier given the portfolio of Minister of State for Civil Aviation, before he was recently shifted to the Ministry of Heavy Industries and Public Enterprises in the recent expansion of the Union cabinet.

He actively participated in making the BJP successful in Karnataka while working as Vice President of its Karnataka Unit during 2009-10. He also successfully handled his position as party treasurer from 2004 to 2014.

Besides, he has served as member of various parliamentary committees, including Consultative Committee for Ministry of Human Resource Development, Committee on Water Resources, on Finance, etc.

The 62-year-old Siddeshwara has been instrumental in implementing various development plans such as Pradhanmantri Gramin Sadak Yojana, Rojgar Hami Yojana and Rashtriya Samvikas Yojana, etc in his constituency. He extensively worked for the cause of farmers as was the case with his father.

Siddeshwara’s performance and efficiency as parliamentarian has been duly acknowledged. He has been rated as the 14th best Member of Parliament in the country on the basis of his attendance, contribution in various debates in the House and the frequency of questions asked by him during the parliamentary sessions. He has also been adjudged the second best member of Parliament in the last Lok Sabha by various organisations, including RPS India and Rezorce Parliamentary Productivity Framework for efficient utilisation of the funds allotted to him for local area development in his constituency.
﻿ WBSKJ24.11.2014
EBVD