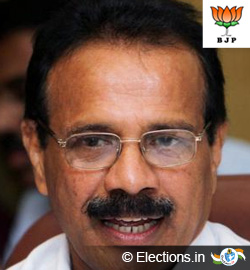 A soft spoken Indian politician and a former Chief Minister of Karnataka,Devaragunda Venkappa Sadananda Gowda is the Minister of Railways in the Indian government. He is the member of the Bharatiya Janata Party (BJP).He won the national-level award for ‘Maintenance of Law and Order’.

He was born in the Gowda family on March 18, 1953 to Venkappa Gowda and Kamala Gowda. Though born in Mandekolu village, a backward village in the Sulya taluka of Kannada district, Gowda pursued his education. After completing his graduation from St.Pilomena’s College, Puttur, Sadananda Gowda obtained his law degree from Vaikunta Baliga College of Law. Subsequently, he became a practising lawyer at both Sullia and Puttur. Gowda was always inclined towards social service. In order to work for the development of people, he decided to join politics and resigned from his job.

He is married to Datty Sadananda and has two sons.

Gowda started his political journey in the late 1970s by joining Jan Sangh. Gowda was interested in politics since his college days. At that time he was appointed as the General Secretary of the Students Union of the college. His political activism and leadership skills made him quite popular. As a result he was elected as the District General Secretary of Akhil Bharatiya Vidyarthi Parishad (ABVP).

The turning point in his political career was the year 1994 when Gowda won the legislative assembly elections of Karnataka. In 1999 he won the assembly elections for the second consecutive time and during this tenure he was appointed as the Deputy Leader of the Opposition.

A prominent administrator, Gowda occupied several positions in Karnataka State Legislature. Looking at his efficiency as a policy-maker, the Bharathiya Janata Party (BJP) appointed him as the National Secretary. All the party meetings and programmes in Goa, now were conducted under Gowda's guidance. His competence in whatever role he was given, was now not hidden from anyone. Gowda's talent took him to the position of State President in 2006 and finally into Modi's cabinet in 2014. He won the 2014 Lok Sabha elections from the Bangalore North constituency.

Gowda's clean image was the most important attribute of his character that helped him climb the ladder of political journey from MLA to CM to Cabinet Minister. It was Gowda's fame that led BJP in South India in 2008 to win assembly elections. The next step for Gowda now was of the Chief Minister. The opportunity came to him after B.S. Yeddyurappa's resignation from the post of Karnataka's CM. Yeddyurappa was involved in an illegal mining case. After becoming the CM, Gowda's first task was to clean the party's tarnished image. In doing so, he had to face lot of rebellion within the party. Finally when he was not able to unite the party, he resigned from the post. But destiny took a new turn for him and he was appointed as the Minister of Railways in the Modi government and presented his first Railway Budget on July 8, 2014.

What does Gowda do when he is not involved in politics? Gowda is a big fan of cultural programmes. What he enjoys most is the Yakshagana. It is a theatre that depicts mythological stories in a musical way. A knock of badminton and tennis can do wonders for Gowda. Not many people know that he is an expert in Kho-Kho and has played at the national level.