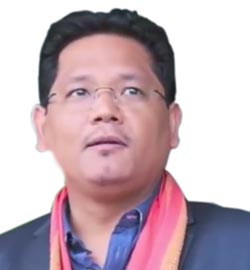 Conrad Kongkal Sangma is the current Chief Minister of Meghalaya. He is also the president of the National People's Party (NPP), the leadership of which he took after his father. He is also the member of Parliament from Tura's constituency.

Conrad K Sangma was born on January 27, 1978, in the town of Tura, located in West Garo Hills district, Meghalaya. He was brought up in Delhi and received his education from St. Columba's School. He did his BBA from the Wharton School of the University of Pennsylvania. He received his MBA degree in finance from Imperial College London. He married a doctor in 2009 and has 2 daughters.

He began his political career in the late 1990s after completing his studies. He started off as a campaign manager in the NCP (National Congress Party) for his father P. A. Sangma. In 2004, he contested his first election but faced a defeat. In 2008, he tasted success with being elected in State Assembly as an NCP member. Later on, he held a number of portfolios such as Power, Finance, IT, Tourism and GAD. He also presented his first budget within 10 days of being a minister in Meghalaya. From 2009 to 2013, he held the position of the Leader of Opposition in Meghalaya Legislative Assembly. In March 2016, he became NPP's president after his father's death.

In the 2018 Meghalaya Assembly elections, NPP won 19 seats, coming second in the rank behind Congress. Sangma's party NPP allied with regional parties due to the requirement of having at least 30 seats to form the government. He was declared the Chief Minister of the state and swore in on March 6.