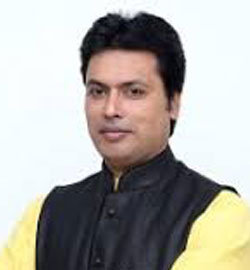 Biplab Kumar Deb is the current and 10th CM of Tripura. He has been the state president of Tripura BJP since early 2016. He is also credited with the success of BJP in the 2018 Tripura Assembly polls, which ended the 25 years rule of Communist Party of India (Marxist).

Biplab was born on November 25, 1969, in Tripura's Gomati district. He did his schooling and graduation from Tripura. He went to New Delhi to pursue Masters. He again returned to Tripura after 15 years. He is married to Niti Deb and is blessed with 2 children - a daughter, and a son.

In August 2017, Biplab brought about the defection of MLAs from INC to BJP. He successfully led the Tripura's Election campaign and ended the decades-old Left's rule in the state by winning 43 seats out of the total 59 seats in the state, in alliance with the IPFT. He contested the Assembly polls from Banamalipur Constituency, held by Congress's Gopal Roy. He was also in the poll battle with CPM's Amol Chokroborty. Finally, he won the seat with a big margin of 9700 votes. He took his oath as CM on March 9, 2018.