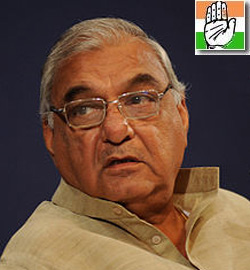 Bhupinder Singh Hooda is the former chief minister of Haryana under whose stewardship the Congress remained in power for ten long years from 2005 to 2014 in the state. Hooda had to vacate the office after the BJP won the 2014 Assembly elections and elected Manohar Lal Khattar as the new CM of Haryana.

A strong Jat leader, Hooda is credited with defeating another Jat leader Chaudhary Devi Lal (who was Deputy Prime Minister of India and Chief Minister of Haryana thrice in a row). Hooda became a mass leader after organising and leading many farmer movements. Before getting elected to the state Assembly with a huge margin, he was a member of Parliament four times.

B S Hooda was born in a Jat family on September 15, 1947 in Sanghi village of Rohtak district, Haryana. His father Chaudhary Ranbir Singh was a freedom fighter. After completing his schooling from Sainik School at Kunjpura, Bhupinder completed BA from the Punjab University, followed by LL.B. from the Delhi University.

Advocate and agriculturist by profession, Hooda got married to Asha Hooda on October 15, 1976 and the couple is blessed with a son Deepender Singh Hooda, who has also embraced political career and is currently an MP from Rohtak.

Currently, B S Hooda is a Bar Council member of Haryana as well as Punjab. He was also the Chairman of Working Group on Agriculture Production, which recommended plans and strategies to increase agricultural productivity as well as production.

The former Chief Minister of Haryana started his career as a Youth Congress activist. He joined politics in 1972 and became president of Congress Samiti of Kiloi Block from 1972 to 1977. His importance in the Congress started growing from 1980 as he was entrusted with three responsibilities – the senior vice president, Haryana Pradesh Youth Congress, the chairman of Panchayat Parishad of Haryana and the chairman of Panchayat Samiti, Rohtak. Hooda successfully executed these responsibilities during 1980-87.

He got elected as Member of Parliament four times – 1991, 1996, 1998 and 2004. From Kiloi Assembly segment, he got elected as MLA in 2000 and functioned as the Leader of Opposition from 2002 to 2004. During 2005 assembly by-poll, he won from Kiloi with a record margin of 1, 03,635 votes. On March 5, the same year he became Chief Minister of Haryana. He became Haryana’s CM for a second term on October 25, 2009. The Congress was hopeful that Hooda would again get the mandate to govern in the 2014 Assembly elections, but his party had to be content with only 15 seats in the Assembly. The BJP won a majority with 47 seats and formed its government in the state.

During his tenure as Haryana Chief Minister, Bhupinder Singh Hooda was criticised by the opposition for concentrating more on the development of his parliamentary constituency Rohtak rather than the entire Haryana. His government was dragged into the controversy over land scams, especially the DLF-Robert Vadra land deal. He was charged with favouring industrialists with large tracts of land bought from poor farmers at throwaway prices. However, no charges have been proved so far against Hooda.
WBVK17.12.2014
EBVD