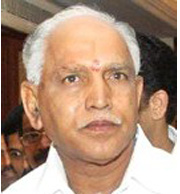 About B S Yeddyurappa

The veteran Lingayat leader has been a pivotal leader for the Bharatiya Janata Party in Karnataka. He was sworn-in as the 23rd Chief Minister of Karnataka on May 17, 2018 and resigned from the post on May 19, 2018. This was the the third-time B S Yeddyurappa took an oath as the Chief Minister. He has led BJP to power in Karnataka twice once in 2008 and recently in 2018.

B S Yeddyurappa was born in Mandya on May 27, 1943, to Late Smt. Puttatayamma and Late Shri Siddalingappa. Born in a village named Bookanakere, he went onto to complete his Pre-University College from PES College, Mandya, where he got associated with the Rashtriya Swayamsevak Sangh. Yeddyurappa remained dedicated towards the RSS cause even though he started working as a clerk, firstly with Social Welfare Department, secondly, with Veerabhadra Shastri's Shankar rice mill. He got married to Mythradevi, the daughter of the rice mill's owner.

By the 1970s, Yeddyurappa was making long strides in the RSS, as he was appointed as Secretary of the Shikaripur unit. He later went onto get elected for Shikarpura Town Municipality before becoming the President of Jana Sangh Taluk unit. Yeddyurappa's steady rise in the public sphere was soon rewarded as he got elected as the President of Shikaripura Town Municipality.

The Lingayat leader was among the several politicians who were put behind the bars during the Emergency Period under the leadership of Indira Gandhi. Emergency was lifted in 1977, with Janata Parivar becoming the first non-Congress government in India since Independence. By 1980, Yeddyurappa became the President of the BJP Shikaripura Taluk unit, and in 1985, he was appointed as the President Shimoga District unit of the BJP.

Yeddyurappa has won 8 out of 9 times he has contested from Shikaripura Assembly Constituency including his recent victory in 2018 Karnataka Legislative Assembly elections. He became the BJP President of Karnataka State in 1988, since then he led the charge of the party till 2008, when he led the party to its first victory in the Southern states of India by forming the first BJP government in Karnataka.

However, this was his second shot at the Chief Minister post as he was the Chief Minister of Karnataka for 7 days during the make-shift government with the JD(S) from November 12, 2008, to November 19, 2008. Yeddyurappa's second term was also incomplete, as he was accused in illegal land deregulation notification scam that led to his resignation in 2011, he formed a new party Karnataka Praja Paksha in 2012, along with some of close associates and won from Shikaripura constituency in the 2013 Karnataka Assembly elections. In 2014, he rejoined the BJP before the 2014 Lok Sabha elections, he was elected as the Member of Parliament from Shimoga Lok Sabha constituency.