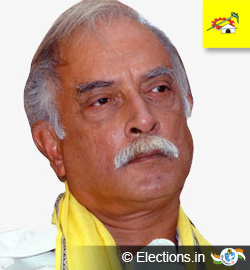 A man who gives the touch of royalty to the Modi cabinet, Pusapati Ashok Gajapati Raju is the new Union Minister of Civil Aviation in the Indian government. He is the senior member of the Bharatiya Janata Party (BJP) from Andhra Pradesh.

Pusapati Ashok Gajapati Raju belongs to the royal family of Pusapatis in Vizianagaram estate. He was born on June 26, 1951 to P.V.G. Raju. His father, Raja Saheb of Vizianagaram, an ex-MP, was in the political sphere for more than 40 years. His family was involved in humanitarian and charitable activities in north coastal Andhra Pradesh. His father donated land for educational institutions in Vizianagaram, Visakhapatnam and Srikakulam districts. In order to remove various socio-academic biases, Raju started the Maharajah Alak Narayan Society of Arts and Science (MANSAS) in the memory of his father Maharajah Alak Narayan Gajapathi.

His elder brother and his sister-in-law are also MPs.

The political journey of Pusapati Ashok Gajapati Raju spans almost 35 years. Following his father's footsteps in politics, Raju is the only Lok Sabha member from residual Andhra Pradesh who managed to make it upto Modi's cabinet. He was first elected to the legislative assembly of Andhra Pradesh in 1978 as a member of Janata Party.

In the year 1982, a new party called Telugu Desam Party (TDP) was formed under the leadership of N T Rama Rao. Raju joined the party and since then has been the loyal member of TDP. Looking at his dedication for the party, he was appointed as the state cabinet minister under all TDP governments. He was the Finance and Revenue Minister in the cabinet of N Chandrababu Naidu and held the portfolio of Excise and Commercial Tax under NT Rama Rao's cabinet.

During his tenure as a Finance Minister in Naidu's cabinet, the state was under financial power. Understanding his responsibility, Raju gave up his official car and other facilities that were given to him by the government.

After joining TDP, it appeared as if Pusapati Ashok Gajapati Raju was on his winning streak. He won the subsequent Andhra Pradesh assembly elections of 1983, 1985, 1989, 1994, 1999 and 2009. He is the MLA from Vizianagaram assembly constituency since years. The only year in which he lost the elections was 2004. But he made a comeback in the 2009 assembly elections.

After serving as a deputy leader of TDP in the last assembly, Raju was given the ticket to contest Lok Sabha elections in 2014 from Vizianagaram constituency. A man with a clean image Ashok Gajapati defeated the YSR Congress candidate with a margin of more than one lakh votes. His debut in the parliament served as his entry into the Cabinet. The only representative of TDP in Modi's cabinet, the Minister is known for his austerity. A trusted man of Chandrababu Naidu, he will certainly be a strong member of Modi government. After taking charge as the Civil Aviation minister, he said "We will strive to create a level-playing field for all the players and make the aviation sector more people-oriented".

Ashok Gajapati Raju was appointed as a member of Andhra Pradesh legislative assembly in 1978, 1983, 1985, 1989, 1994, 1999 and 2009. In 1982 he joined TDP. He served as the state cabinet minister in 1980s. He won the Lok Sabha elections in 2014. Ashok Gajapati Rajubecame the Minister of Civil Aviation on May 27, 2014.
Political Leaders
Election Results
Government of India
Political Parties
Elections in India
Election Commission of India
Chief Electoral Officers
General Elections Results