Track your constituency
Live News
Live News
PM, CM don’t work Without Seeking Nod of Gaming Industrialist Friends: Rahul in Chhattisgarh Deduction for Mortgage Interest. Taxpayers can express write-offs for real estate loan interest (HLI) under salaries tax and private evaluation. Get The Cash You Want for Unforeseen Expenditures The site’s character examination is helpful with regards to discovering the right match for you personally a people that are in search of exactly the same thing
Elections » Political Leaders » Anil Kumar Vij Profile 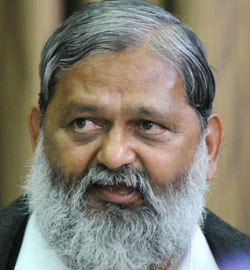 Anil Kumar Vij became the first candidate to be announced as winner during the October Haryana Assembly elections. He defeated his nearest contender Congress’s Nirmal Singh by a margin of 15,462 votes from the Ambala Cantonment constituency. He was among the leading Bharatiya Janata Party (BJP) contenders for the post of Chief Minister along with O P Dhankar, Capt. Abhimanyu, and Manohar Lal Khattar. However, Khattar won the race and was sworn in as the Chief Minister of Haryana on October 26, 2014. Anil Kumar Vij is now a cabinet minister in the first BJP government in Haryana.

According to him, a new dawn has set in after BJP got absolute majority to form its government in Haryana.

Born on 15 March 1953 in Ambala Cantt to Bhim Sen, Anil Vij completed his schooling from Banarasi Dass High School in 1968 and then completed his graduation in 1972 from Sanatan Dharam College. Living at Shashtri Colony, Ambala Cantt, Vij is unmarried. Though he started his career as a business person, he is currently a full time politician.

Anil Vij has become MLA from the Ambala Cantonment constituency for the fourth time. He is also among the permanent invitees to the BJP National Executive.

Anil Vij’s name again hit the headlines when, just after swearing in as the cabinet minister of Haryana, he announced that a probe will be initiated against Congress president Sonia Gandhi’s son-in-law Robert Vadra’s 'shady' land deals, running into to 70,000 acres. He went on to say that investigation will be done to check whether the acquired lands were used for the purpose for which they were acquired in the first place. In 2019, Vij was again elected for the sixth time as Bharatiya Janata Party's MLA Ambala Cantonment. On 20 November 2020, Vij becomes the first in his state to volunteer for the anti-COVID vaccine. He was administered a trial dose in a Ambala Cantonment hospital.

Controversies in which Anil Vij is involved

Anil Vij got involved in a controversy in the recent past. On March 4, 2014, Vij was suspended from the Assembly for making unwanted remarks against a woman minister in the house. The incident happened when Vij was speaking on Appropriation Bill in Assembly. During his speech he made some comments against Geeta Bhukkal, the then Education Minister of Haryana. He was asked by the minister to take back his words. However, Vij did not. This made the then Parliamentary Affairs Minister Randeep Singh Surjewala to move a resolution against the supposed remarks. Ultimately, Vij was reprimanded and also suspended on contempt of the house.
WBDB30.10.2014