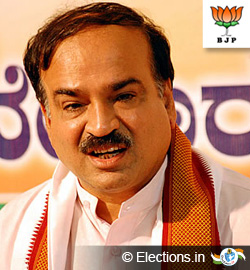 A prominent Indian politician known for his political dexterity, Ananth Kumar is the minister in Modi cabinet. A key member of the Bharatiya Janata Party (BJP), he is appointed as the Minister of Chemicals and Fertilizers in the Modi government.

He was born in Bangalore on July 22, 1959 to H N Narayan Sastry and Girija. Born into the Brahmin family of middle class, he obtained the degree in law. He is married to Tejaswini and the couple is blessed with two daughters. Since childhood, Kumar talked about his love for the country.

Kumar who believes that 'The foundation stones for a balanced success are honesty, character, integrity, faith, love and loyalty', began his political career as a member of Akhila Bharatiya Vidyarthi Parishad (ABVP) in Karnataka. As the member of ABVP, he rose to the position of National Secretary in 1985. He became the most influential student leader in the state. In his various positions as a member of ABVP, his managerial ability came to the forefront.

Deciding to take a step into the bigger area of politics, he decided to join BJP in the year 1987. His dedication and commitment raised him to the position of the State President of the party's Yuva Morcha and he finally became the party's General Secretary in 1995. As a result, in the subsequent year he was given the ticket to contest Lok Sabha elections from Bangalore South constituency. He won the elections and thereupon the graph of Kumar's parliamentary career kept rising. He won the Lok Sabha elections of 1998, 1999, 2004, 2009 and 2014. Thus, his popularity got him elected for six consecutive times. In the 2014 General Elections, the INC candidate Nandan Nilekani posed a tough challenge to Kumar. Kumar managed to retain his seat and defeated Nilekani by a margin of more than two lakh votes. And finally, secured a position in Modi's cabinet.

A party loyalist, Kumar was appointed as the Minister for Civil Aviation in Atal Bihari Vajpayee's government. He also occupied many other positions in the ministries under NDA rule. He held various ministries like Tourism, Sports & Youth Affairs, Culture, Urban Development and Poverty Alleviation. His stint during this period lacked lustre. But now as a Cabinet Minister in Modi's government he has got the opportunity to fix-up his image.

Having a strong political bent, Kumar has always been close to the party heads be it Advani or Vajpayee and at present Narendra Modi. He always stood behind Advani through his ups and downs. He refused to discard his responsibility towards his mentor even though he faced the indignation of RSS in his attempt to give Mohammad Ali Jinnah, 'the secular' tag. It is also believed that Kumar played a major role in the eviction of former Karnataka chief minister B S Yeddyurappa from the party. After Yeddyurappa's resignation in 2010, Kumar tried his level best to gain the position. But he failed to convince the Centre. Ananth Kumar died at 2AM on 12th November 2018 at a hospital in Bengaluru. He was 59. The union minister was suffering from cancer and had returned from the US after treatment at a cancer institute in New York

A six time winner from Bangalore South, people of the constituency praise him for the actions taken by him for the welfare and the development of the people. He is regarded as the voice of common man.

Ananth Kumar is a strong believer in nationalism and his own culture. He created history when he became the first person who spoke in Kannada in United Nations. He is also involved in many social and cultural activities. His famous pastimes include sight-seeing and playing with the kids.