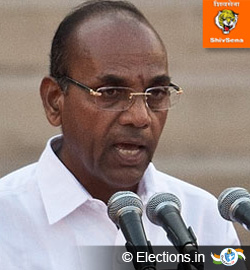 Anant Gangaram Geete, Union Minister of Heavy Industries and Public Enterprises, is a senior leader of Shiv Sena. He represents the Raigad constituency in Maharashtra. Though he is still in the Narendra Modi cabinet, his continuance in the Narendra Modi government has been the subject of much speculation because of the souring of ties between Shiv Sena and Bharatiya Janata Party. As per the available information, Anant Geete will continue as a Union Minister as of now but the final decision in this regard will be taken only when Prime Minister Modi comes back from his 10-day foreign tour that includes ASEAN Summit and G-20 meeting.

Son of Gangaram Sambhaji Geete and Anandi Bai, Anant Gangaram Geete was born on June 2, 1951 in Mumbai. He completed his matriculation from Ratnagiri’s Mumbai Board, which was earlier known as Pune Board.

Till now Geete has been elected as MP six times (in the years 1996, 1998, 1999, 2004, 2009, and 2014). During his entire tenure in the parliament till now, starting from the year 1996, he has been part of several committees including Railway Convention, General Purposes, Business Advisory, Committee Urban and Rural Development, Ministry of Human Resource Development’s Consultative Committee, Committee on External Affairs, Estimates, Ministry of Civil Aviation’s Consultative Committee, Food, Consumer Affairs & Public Distribution, Business Advisory, and OBC Committee.

Anant Geete became leader of the Shiv Sena Parliamentary Party in the years 1999, 2009, and 2014. He first became MoS of Ministry of Finance, Banking and Expenditure in 2002 and this tenure lasted for not even two months (July 1, 2002 to August 25, 2002). He became. However, on August 26, 2014 he became a full cabinet minister. He got the power portfolio and remained in that position up to May 2004. Anant Geete got elected for the 6th term in the recent Lok Sabha election of 2014 and was inducted in the cabinet by Narendra Modi as Union Minister of Heavy Industries and Public Enterprises on May 27, 2014.