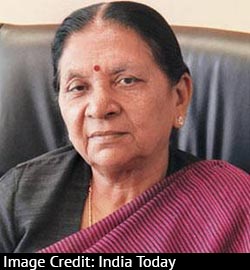 Anandiben Patel is an Indian politician belonging to the Bharatiya Janata Party (BJP). She is the former Chief Minister of Gujarat.
She was the first woman to become the Chief Minister of the state. Anandiben has held a number of portfolios in the Gujarat government such as Revenue, Road and Building, Urban Development and Urban Housing and others during 2007-2014. Before joining politics, she was a mathematics and science teacher and later a principal at Mohinaba Kanya Vidyalaya, Ahmedabad.

Anandiben Patel was born on 21 November 1941 to Jethabhai Patel in Kharod village of Mehsana district of Gujarat. She has attended N.M. High School in Ahmedabad, the same school where Prime Minister Narendra Modi has also studied. Anandiben was one of the only three female students in the school. She remained a district level champion of athletics for consecutive three years during her school days. She was the only female student in her entire college when she went on to pursue her B.Sc in 1960 at M.G. Panchal Science College. Patel was felicitated with the “Veer Bala” award for her outstanding achievement in athletics.

As her first job she joined Mahila Vikas Gruh, which works towards the betterment of women. Here, she used to teach various vocational courses to the widows.

Anandiben Patel got married to Mafatbhai Patel on 26 May 1962. She has two children from this marriage- Sanjay and Anar. Her husband was a professor at the Saraspur Art & Commerce College. She moved to Ahmedabad with her husband in 1965 where she attained her master’s degree in science. There, she took the charge of providing education to all the children of her extended family simultaneously.

Before becoming the principal of the Mohinaba Vidyalaya, Anandiben taught science and mathematics to higher secondary students.

Anandiben Patel's entry into politics was a consequence of an accident that took place in 1987 during a school picnic. When Patel was the principal of Mohinaba Vidyalaya, she jumped into Sardar Sarovar reservoir to save two drowning girls. For her heroic act, Anandiben was honoured with the President's Bravery Award. Following Patel's feat and her subsequent recognition, BJP top brass suggested that she should join the party. After initial reluctance, she joined BJP considering politics to be a platform to serve the society and reach out to a greater number of people. At her joining in 1987, she was appointed as the Gujarat Pradesh Mahila Morcha President.

Anandiben spent weeks aiding local people at the bird-flu struck Viramgam district, and pressurising the government officials to take stringent actions to curb the disease. This was her first notable work as a politician. She was the only woman member from Gujarat in the Ekta Yatra of senior BJP leader Murli Manohar Joshi in 1992.

In 1994, Anandiben Patel was elected to Rajya Sabha from Gujarat and as an MP she represented India at the Fourth World Women's Conference held at Beijing, China in the same year. In 1998, Patel contested her first assembly election representing Mandal constituency after having resigned from Rajya Sabha. She was appointed as the Minister of State in the Keshubhai Patel government. Later, she was given the portfolio of Education as a cabinet minister of Gujarat. To address concerns related to education, Anandiben Patel started 'Lok Darbar' during her first stint as an Education Minister.

In the 2002 and 2007 Gujarat Assembly Elections, Anandiben contested from Patan assembly seat; both times in the Narendra Modi regime. She emerged victorious in both the elections, and continued with the department of Education as a cabinet minister in her second term and was given the Roads & Building and Revenue portfolio during her third term.

Connecting Patan with the Narmada canal for the benefit of farmers, constructing 174 dams in the region, building one of the largest water filtration plants to provide citizens of Patan with pure drinking water and the building of more than 700 km stretch of road networks and underground drainage systems were some of the notable achievements of Patel's ten year long association with the constituency. Anandiben Patel contested the 2012 Assembly Elections from Ghatlodiya assembly constituency. She won with the largest victory margin in the entire state that was more than 1,75,000.

Anandiben Patel was sworn in as the 15th Chief Minister of Gujarat on 24 May 2014 after the incumbent chief minister Narendra Modi was elected as the Prime Minister of India. She offered to resign from her post in August, 2016 following allegations of mishandling of the law and order situation in the state. The BJP accepted her resignation.