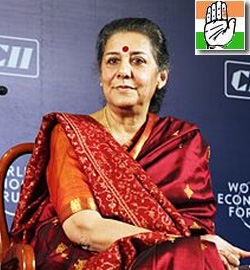 Ambika Soni is a Congress Party leader and a member of the Rajya Sabha from Punjab. She has served the Indian government in various capacities including as the Minister of Tourism, Minister of Culture, and Minister of Information & Broadcasting. She has recently resigned from the cabinet and has been given the role of strengthening the Congress party for the upcoming Lok Sabha elections.

Ambika Soni was born on 1 July, 1973 in a village called Saifai in Etawah district of Uttar Pradesh. His father, Mulayam Singh Yadav, is a former chief minister of Uttar Pradesh. Mulayam Singh Yadav founded the Samajwadi Party of which he is also a member. Ambika Soni's mother is Malti Devi. Akhilesh completed his schooling at Dholpur Military School in Rajasthan. Thereafter, he completed his Bachelor?s and Master?s degree course in Civil Environmental Engineering from Mysore University. He also studied in the University of Sydney, from where he holds a degree in Environmental Engineering. By profession he is an engineer, agriculturist and a socio-political worker.

The success of the 'Incredible India' campaign is attributed to Ambika Soni. It is under her aegis that a fresh approach was taken towards turning the Indian Tourism Industry into a revenue generating industry. The campaign led to 10%-14% growth in the tourist traffic in the country.

Congress party has leveraged Ambika's political acumen and trusted her as one of the major trouble shooters. She was given the responsibility of enforcing discipline within the Kerala Congress unit.

During her tenure as the Information & Broadcasting Minister she faced criticism for her stand on self-regulation for electronic media. The ministry was brought under the scanner for not being able to put 'paid news syndrome' under control. The demand for a regulatory mechanism and a statutory body on media regulation escalated as critics cited that media 'had lost a sense of propriety' and 'worked only as a commercial enterprise.' Ambika maintained that external regulations of electronic media will not resolve the issue.

Delay in digitization of cable was another issue that marred her achievements to some extent. Despite the fact that the initiative gained momentum during her role as the I&B Minister, the methodology caused bottlenecks in its implementation.

Ambika Soni was recognized as the 'IMPACT Person of the Year 2012' by an industry body for, ushering in reforms in the media and promotion of self-regulation for electronic media.