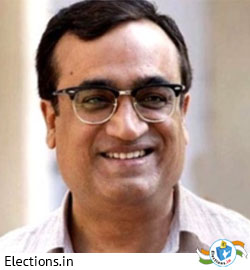 Ajay Maken is a Indian politician born on January 12, 1964. He is a member of the Indian National Congress (INC). In the 15th Lok Sabha, he was a member of parliament of India from the constituency of New Delhi. Formerly, he held the position of union cabinet minister for Housing & Urban Poverty Alleviation. His political career has been quite impressive as can be seen by the positions held by him: Union Minister of State for Youth Affairs and Sports (independent charge); Union Minister of State for Home Affairs; Union Minister of State for Urban Development; and Cabinet Minister for Power, Transport and Tourism, Government of Delhi.
For three consecutive terms,that is, 1993, 1998 and 2003, he was elected a Member of Legislative Assembly (MLA) from the constituency of Delhi. In 2003, at the age of 39, he became the youngest Speaker in an Indian State Assembly in the Legislative Assembly of Delhi. In 1999 Mr. Ajay Maken was appointed as the Parliamentary Secretary to the Chief Minister of Delhi, Smt. Sheila Dikshit and acted as the chief minister’s principal consul and troubleshooter.

Ajay Maken was appointed as the chief of Congress Campaign Committee for the assembly elections of Delhi 2015. Maken was also fielded from the Sadar Bazar assembly constituency as the CM candidate of Congress. The Congress was handed an embarrassing washout in the elections and failed to win even a single seat of the 70 member assembly. Maken, himself could not end up as the runner-up and came third behind Som Dutt of AAP and Praveen Kumar Jain of BJP.

Ajay Maken belongs to a family of freedom fighters and politicians. His great grandfather Shri Jagat Ram and grandfather Shri O. P. Maken were freedom fighters and hailed from the Haria town of Gujarat district, now a part of West Pakistan. His uncle Mr. Satya Prakash Maken was a Metropolitan Councilor, he died at an early age of 26, which led his uncle Mr. Lalit Maken into politics. Mr. Lalit Maken later became a popular Trade Union leader and also an MP. He was married to Smt. Gitanjali, who was the daughter of Late Shri Shankar Dayal Sharma, the ex-President of India. The demise of Mr. Lalit Maken and his wife Smt. Gitanjali saw the entry of Ajay Maken into active politics.

Shri C. P. Maken and Smt. Santosh Maken were the parents of Ajay Maken. He is married to Smt. Radhika Maken and has a son, Aujaswi, and two daughters, Aarushi and Ahana. Ajay Maken was a student of St. Xavier’s School, Delhi. Thereafter, he did his graduation in B.Sc. Chemistry (Hons.) from the Delhi University. This is where his political career took a start when in 1985 he was appointed President of the Delhi University Student’s Union (DUSU). By profession, Ajay Maken is a businessman.

How did Ajay Maken Join politics?

Ajay Maken was a student at Delhi University where he started his political activities. He became the President of the Delhi University Student’s Union (DUSU) in the year 1985. The Delhi University Student’s Union represents students of most of the colleges and faculties under Delhi University. The elections held in DUSU are considered prestigious and hold special significance among student unions. It gives opportunity to young aspirants to pave way into local and national politics. Ajay Maken’s uncles, namely, Mr. Satya Prakash Maken and Mr. Lalit Maken, were into politics and held important positions during their lifetimes as Metropolitan Councilor and Trade Union leader, respectively. Ajay Maken followed the legacy, and after the unfortunate demise of his uncle Mr. Lalit Maken, he was elected the President of the Delhi Transport Corporation Trade Union.

During his tenure as Power Minister, Ajay Maken implemented Power Reforms, which ensured long-term impact on adequacy and supply of Electricity in Delhi. Ajay Maken was a key player in getting sanctions for the gas-based 330 MW Pragati Power Project.

Installation of electronic meters and setting up of helplines for commuters were some of the steps taken by Ajay Maken as a Transport Minister.