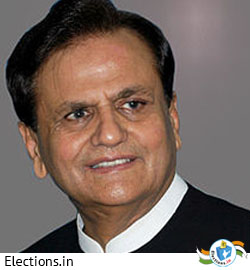 Ahmed Patel is an Indian politician who holds senior position as a member of the Indian National Congress.At present Ahmed Patel is the political Secretary of the Congress President Sonia Gandhi. He is considered as one of the national-level leaders of the party involved in the decision making process. Popularly referred as Ahmed Bhai, he is considered second to Congress President Sonia Gandhi among most politicians. Often tagged as the crisis man, he is perceived to be consulted by Sonia Gandhi on different political overtures by the political circle. He is known to be a smart and good-natured person.

Ahmed Patel was born on 21 August 1949 in a village called Piraman which is located near Ankleshwar, the industrial city in Bharuch, Gujarat. His father was Mohammed Ishakji Patel and mother was Hawaben Mohammedbhai. He completed his B.Sc. from Shree Jayendra Puri Arts and Science College in Bharuch and MS University, Baroda. On 7 March 1976 he married Memoona Ahmed Patel and they are blessed with a son and a daughter. By profession he is an agriculturist. His interests include music, reading, gardening and cultural programmes.


Other positions held by Ahmed Patel

It was alleged in July 2008 that Ahmed Patel was involved in the scam of cash-for-votes when the trust vote for the UPA government was undertaken. The Speaker of the Lok Sabha had undertaken investigation of the whole episode; however, Mr. Ahmed Patel was given a clean chit formally as there was no evidence found to support the allegation against him.